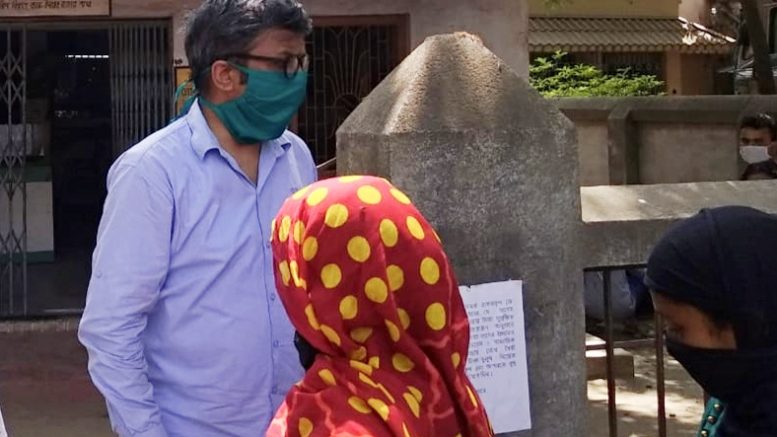 Krishnagar, May 15: A WBCS (Executive) officer posted in Nadia has so far spent over Rs.65000 to help the migrant laborers from Nadia who are stranded in different parts of the country due to nationwide lockdown for Covid situation.

Manish Verma, a 2001 batch officer, who originally hails from Juanpur in UP, now serving as the sub-divisional officer in Krishnagar (Sadar) has turned a ‘good samaritan’ for the laborers from different parts of Nadia trapped in places like Surat, Mumbai, Tuticorin (Thoothukudi) and other places due to the lockdown.

Knowing about their condition from different sources, Verma, who is known for innovative ideas and strong acumen in district administration, personally made contact with them and sent money to their bank accounts directly so as to provide them little respite in distress.

Hundreds of migrant laborers were stranded in different parts of the country without money and food as the nationwide lockdown to contain the spread of Covid-19 was announced by the centre on March 22. Bengal has a huge number of such laborers who were trapped in different states, this includes laborers from Nadia trapped in states like Gujarat, Maharashtra, Kerala and other places.

Verma with the personal initiative has tried to help many such labors sending them money to their bank account.

“We have been passing through a critical phase due to Covid. A huge number of people are in serious trouble and I have been able to do too little for them. Their condition often haunts me. There was a call from inside my soul and I tried my best to provide them little relief”, a humble Verma said, who has earlier served Nadia as SDO Ranaghat and as the Estate Manager in Kalyani. “Apart from a civil servant, as a human being, my endeavor is always to help people in trouble with my limited resources. I just did this whenever I heard people being trapped due to lockdown miles away from home. Sometimes, many people made direct contact with me through the district control room, in certain occasions I personally made contact with them to obtain their bank details after reading about their plight in newspapers”, he said.

Sources in the district administration said, Verma, has paid the entire amount from his personal savings either through bank transfer or in cash by handing over the amount to family members of the laborers as they wished.

“As a human being, I have done from social responsibility. I will be happy to see people with similar gestures using their personal resources. It is not the amount of money which one can offer as help, rather the approach is reckoned”, Verma said.

Local sources in Krishnagar said that Verma has also given money to social organizations that have been feeding homeless people and street dogs since lockdown was imposed.

Raju Bhowmik, a migrant labour trapped in Surat said, “I along with some of my colleagues are trapped in Surat. It was Verma Sir who sent us Rs.10000 just knowing about our plight. We will never forget such a gesture”.

Najmal Hassain Mallick, a labour trapped in Tuticorin said, “He is an exceptional man. Knowing about plight he sent us money to our bank account”.