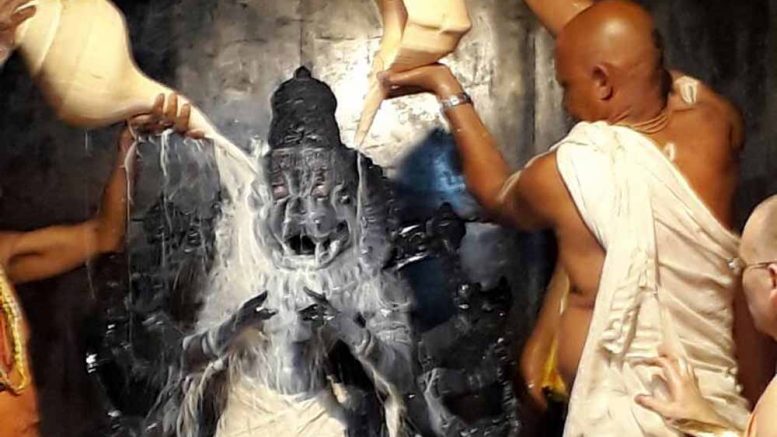 Mayapur, May 9: The devotees of ISKCON celebrated Narsimha Chaturdashi, the divine appearance day of Lord Narsimha Deva in Mayapur today with traditional pomp and gaiety.

A large number devotee including the Iskcon residents from across the country gathered on the occasion in Mayapur that bears special significance as it reinforces the faith that Lord Krishna incarnates in various forms as a saviour of his beloved devotee and destroyer of evil force.

It is believed that Lord Narsimha Dev appeared to protect the devotional service of Bhaktraj Prahlad and annihilated the demon Hiranyakushipu.

The festivities were spread over three days that commenced from Sunday when devotees fetched water from the river Ganga for the bath of the deity.

On the next day Maha-Sudarshan homa was performed and grand Lakshmi Narsimha palanquin procession was taken out in the evening. 12 hour nonstop keertan also rendered by devotees to mark the celebrations. In the wee hours Mangal Arti was performed, discourses from Srimad Bhagwatam glorifying the pastimes of the Lord Narsimha Deva was also recited by senior devotees followed by “Darshan Arti”.  At dusk, hour long “Maha-Abhisheka” of the deity was performed by using fragrant oil, perfumes, honey, ghee, yogurt and fruit juices.

It was an amazing spectacle when hundreds of devotees raised their arms danced in ecstasy while chanting Narsimha prayers. The fragrance of the oils and melodious chanting by the devotees filled in the air with spiritual bliss.