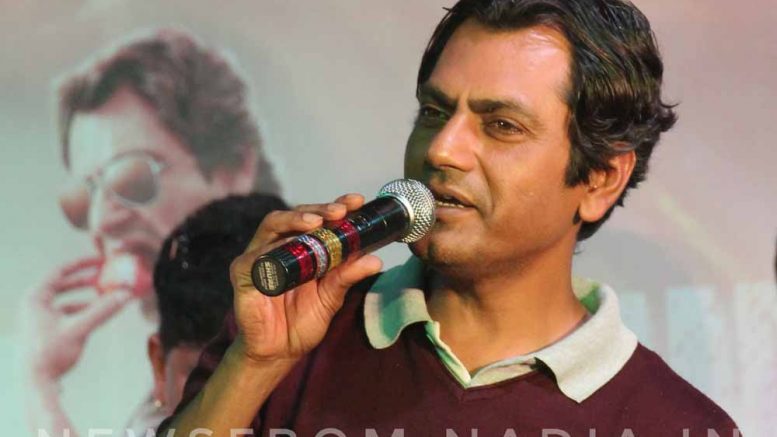 Nawazuddin speaking to the students

Kalyani, Aug. 12: Actor Nawazuddin Siddque today welcomed removal of Central Board of Film Certification (CBFC) chairperson Pahlaj Nihalni by the Information and Broadcasting Ministry terming it as a ‘great decision’ by the Government. He said that the ouster Nihalni is probably the most awaited news about which any person associated with the film industry would be happy. The actor is hopeful that the new board led by Prasoon Joshi would respect the ‘creative freedom’ of film directors and artistes which almost died in the regime of Nihalni.

“I am very happy. The Government has done something which should have been done earlier. This decision would help the film industry to a great extent as the creativity was under stake under the previous board” – Nawazuddin Siddque

Speaking at the outskirt of annual social of Dolphin School of Hotel Management in Kalyani, where he also talked about his upcoming film “Babumoshai Bandookbaaz” that suffered 48-cuts in the hand of Nihalni, the versatile actor said: “It is not just me, or the any person associated with “Babumoshai Bandookbaaz”, rather the film fraternity as a whole ought to be happy with the announcement of removal of Pahlaj Nihalni from the CBFC. He ordered 48-cuts from “Babumoshai Bandookbaaz”, which is quite enough to kill the film. The board under him never gone by logic or ever bother to respect the creative freedom of the directors”.

In last month the CBFC shocked the film fraternity when it asked the “Babumoshai Bandookbaaz” director Kushan Nandy to make 48cuts from the film. The instruction raised a controversy as the film fraternity accused the board of moral policing ignoring the creative need to portray the characters for which the language is very important for its local rustic flavor.

Dedicating the film to the persons “not fair and not handsome” like him, Nawazuddin today said: “I am very happy. The Government has done something which should have done earlier. This decision would help the film industry as the creativity was under stake under the previous board”.

The actor, who was in a very jovial mood today after interacting with the students at the hotel management institute also said that he has a lot of expectations from the new CBFC chairperson Prasoon Joshi.

“He is a good friend with lot of creative sense. I hope he would come up to fulfill our expectations and provide a new identity to the CBFC leaving the prejudices”, Nawazuddin said.