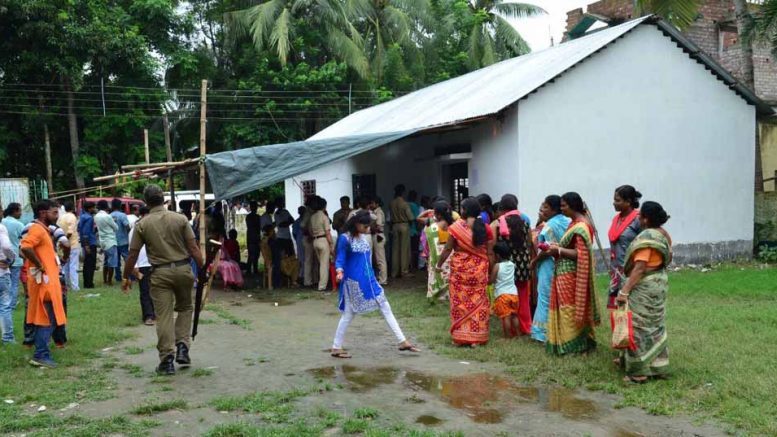 Voters in a queue to caste their votes in Cooper's Camp Cooper’s Camp, August 13: 5th civic poll in Cooper’s camp today passed off peacefully largely in 11wards literally in absence of any opposition in front of ruling Trinamul Congress. Poll was not held in ward-7 where Trinamul Congress candidate won without any contest. The total turnout of poll was recorded as 92.86% at the time of end of poll, informed sub divisional officer of Ranaghat Prasenjit Chakraborty. In 2012 the turnout was recorded as 93%.

Today the perople in Coopers decided the destiny of 32 candidates in 11 wards. Polls were taken at 13booths accommodated under 7 polling stations across the Cooper’s camp town. The votes will be counted on August 17.

The day witnessed only exception in the otherwise trouble free poll when Independent candidate in Ward-1 Supriya De was allegedly beaten up by her rival Ashoke Sarkar when she alleged that her symbol was blocked on the ballot unit at the Iswar Chandra Vidyasagar primary school. Ashoke, however, alleged that Supriya slapped his polling agent inside the pulling station. Police personnel immediately dispersed the supporters of the erring rivals to restore normalcy.  The BJP, which fielded 11 candidates out of 12 and the CPM which is fighting in only 7 wards, were not visible at all during the day, even though both the parties alleged large-scale malpractices against the ruling Trinamul Congress. DM Nadia Sumit Gupta said, “No complaint was received throughout the day. We have only one information of poll related tension that occurred in Ward 1, but no complaint was lodged by either side.

Trinamul Congress leader and MLA Sankar Singh, who was in charge of the party’s polling machinery today rubbished the allegations of threats and violence raised by the opposition, particularly by BJP prior to the poll. “The Polling today held very peacefully. There was no tension. All people casted their votes as per their choice. People were in the queue to exercise their democratic rights, but those who raised allegations could not be seen anywhere in the town”, Sankar Singh said precisely.