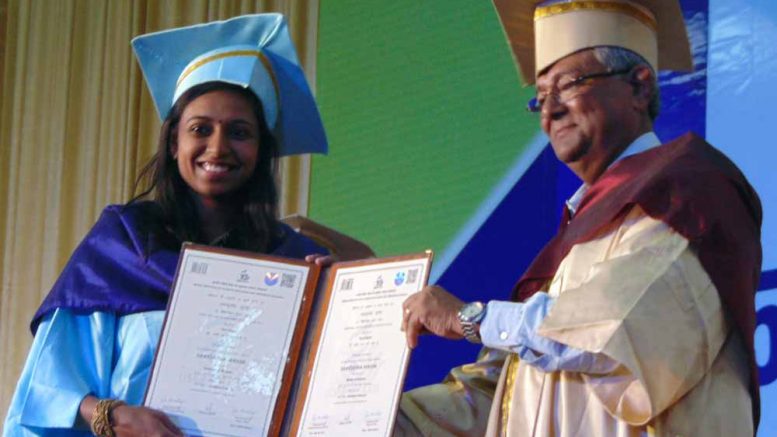 Mohonpur, May 26:The Indian Institute of Science Education and Research –Kolkata (IISER-K) authorities think that there is no deficiency in their existing mechanism of students’ management and the institute is not at all interested to waste time in its review or rectification.

Director of IISER-K professor R.N.Mukherjee today categorically stated that everything at the campus is running alright and ruled out any review in its students’ management system.

When asked about outcome of the review of its mechanism as planned during the summer vacation in the wake of alleged suicide of Sagar Mandal, a BS-MS second year student, he said: “We have nothing to review and nothing to rectify. We have a planned mechanism which is in a developing stage. But, that does not mean it has a deficiency. We need time to complete building up the system in completely”.

Mukherjee told this to media persons at the outskirt of the 5th convocation of the IISER-Kolkata held today at its campus. Significantly enough in his speech Mukherjee did neither mention a single word about the death of the promising student nor made any proposal any precautionary steps for students except claiming that the institute has full-fledged medical unit that offers comprehensive and quality health care to students and staff and faculty members.

However, a section of the teachers are shocked for absence of any remedial for students in his speech and about the claim of medical unit which they termed ‘not reality’ at all.

“It is no less than a lie. The medical unit of the institute is one of the weakest parts of the infrastructure and nothing has been done in past few years to develop its condition. It is almost like absence of counseling system and the mentorship that was discontinued”, a teacher said.

Mukherjee, however, appeared to be unperturbed about the allegations. He said: “One has to understand the meaning of counseling. In institute like IISER the typical counseling system does not exist. We have developed a comprehensive monitoring system involving senior students, teachers, and faculty. Remedial measures are taken on the basis of feedback by students”

“We have 1200 students here and it is not possible for one ‘profession counselor’ to look after all these students. Nor this can be done only by a teacher. None of them live in the campus. So we have involved the students who can access deep in the mind of the students and can know their problems. If it is any academic issue the UG or PG council intervenes. If the students need any support of psychological counselor we provide that support.”

However, this system is yet to build up completely at IISER-K, claimed dean of students’ welfare Arindam Kundagrami.

“There was a mentorship earlier. But from 2015 we have introduced the new system, which is being misinterpreted by a section of media. Now for every 10 new students we have involved at least five senior students so that they can read their mind and report accordingly. But, senior students of 5th year could not so far be brought under this programme. This is the only incompleteness of the initiative which we are trying to solve, he said.

“The complete mechanism will be introduced when classes resumed after summer vacation”, he added.