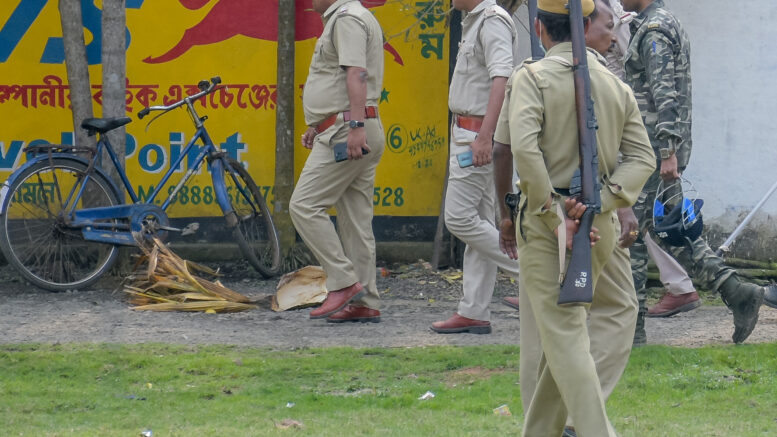 Ranaghat, March 3: A political controversy has cropped up in Nadia following the transfer of Taherpur police station’s officer in charge Avijit Biswas, barely within five hours since the Trinamul Congress suffered an unexpected defeat to CPM in civic polls in the town.  While the opposition raised finger about the timing of the transfer claiming that the OC has been made a victim of the ruling party’s defeat, the police administration rubbished any suspicion terming it as a ‘routine’ one.

In the civic poll that was held on February 27, CPM won in 8 wards out of 13 which also helped the party to retain power in Taherpur.

This small town eventually came up as one of the two civic bodies in the state where the ruling party failed to make an impact with its men and machinery. Trinamul insiders claimed that a pro-active role of Taherpur police led by Sub Inspector Avijit Biswas on the day of polling had posed a problem before the local leadership towards mobilization of voters and to ‘manage’ booth that actually led to the defeat of the party.

“Biswas was unusually proactive on the day of polling and basically non cooperated with our party activists…The leadership did not take the matter easily”, said a Trinamul leader while disclaiming any connection of his transfer with his activities on the day.

On Wednesday afternoon, a transfer order was issued by the police administration, which has been asked to join the office of the superintendent of the Ranaghat police district.

Biswas has been replaced with Dhantala police officer in charge Amiyotosh Roy. His transfer has also been issued in the same order.

CPM for obvious reasons has raised finger at the Ranaghat police administration.

“Police was never impartial throughout the election process. But, it is true that on the day of polling, Avijit Babu and his team were a bit different and tried their best to ensure fair polling as far as possible. The polling personnel in different booths also tried their best except few malpractices. At the same time, there were people in groups to resist miscreants from looting votes. These were enough to change the game against Tinamul. So being the police chief of the town Biswas ought to suffer the wrath of the ruling party”, said Supratip Roy, CPM’s Taherpur area committee secretary.

“An officer is definitely eligible for transfer on completion of his tenure. But the timing here has raised the suspicion.  There would have been no doubt if he was removed prior to the election or a few days later”, Roy added alleging that the Trinamul has made it a practice to punish the police officer for their efforts to play a non-partisan role.

Additional SP of Ranaghat police district Rupantar Sengupta, however, rubbished all such allegations. “Avijit Biswas’s has served for over four years as the PC Taherpur and thus his transfer was due. It was a routine affair. Decision of his transfer was finalized before the poll, but it could not be executed due to the municipal poll”.

Nadia south Trinamul Congress president Ratna Ghosh also refuted the allegation. “The transfer is a routine matter. At least three officers were transferred and there is no relation between these transfers and Taherpur poll results”.