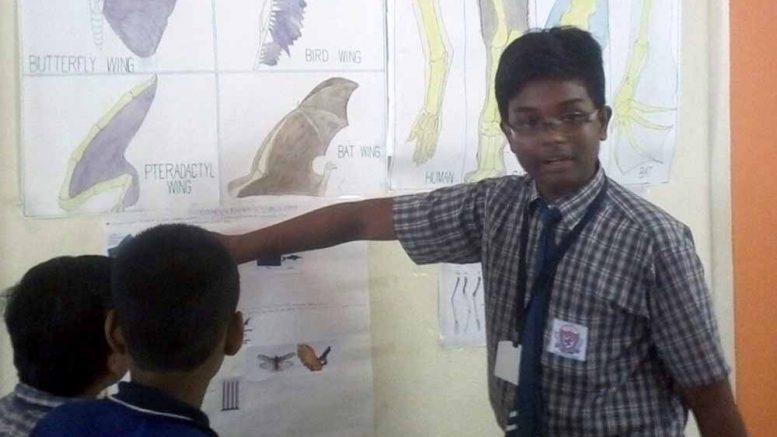 An ambassador of evolution showing a chart to his friend Kalyani, Sept. 8: 48 students reading in different classes between V and VIII at Kalyani based Oriental Public School today turned teachers to explain their friends the basic concept of “evolution”. They visited the class rooms tirelessly interacting with their friends, asked them questions, explained the models, took notes and rated them finally being the ‘Ambassadors of Evolution’ during a science fair that was held at their campus.

Most of these “ambassadors” appeared to be very adept to the task of teaching and explain which they were entrusted as time went by.

There were themes on diverse subjects like Charles Darwin’s voyage and his study of the finches, evolution of humans, evolution of different types of beaks to the rise and fall of dinosaurs; evolution of the heart to a simple game to demonstrate survival of the fittest. In every aspect the students come up as prudent leader. A student explaining evolution to his classmates

on a grant received from the European Society of Evolutionary Biology (ESEB), which in last month organized a workshop titled “Ambassadors of Evolution” supported by Indian National Young Academy of Science.

IISER-K Professor Anindita Bhadra, convener of the workshop said: “The objective of the workshop is to teach the middle school students about the basic concept of evolution which is often misrepresentation and underrepresented in school curriculum. The children never get a clear picture of it. So our aim was to help children to understand its basic concepts”.

During the two days’ workshop the children heard the lectures with patience and curiosity, watched videos, tried simple hands on experiments on evolution in their bid to learn the subject, she added.

“It was great experience. I read about evolution in my books but that never gives a clear picture. But, the workshop made it clear to me”, a student said.