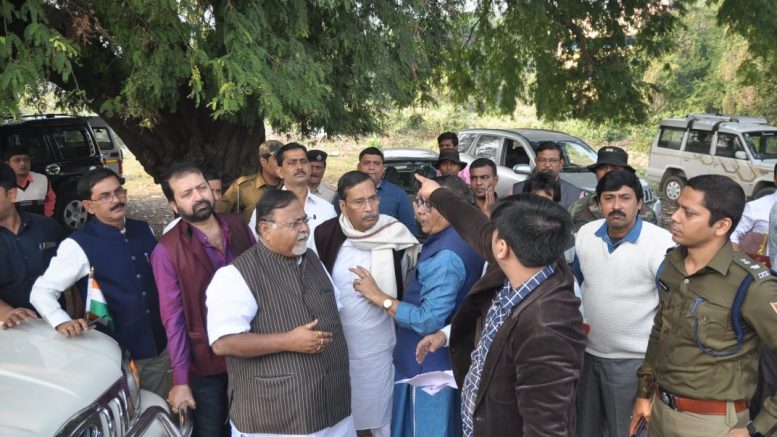 Krishnanagar, Dec. 21: The proposed Kanyashree University is most likely set to come up at the heart of the Krishnanagar town after Nabanna raised its objection to 14 acres land the district administration identified earlier for the project.

On Friday education minister Partha Chatterjee visited at least two others lands apparently as per the direction of the chief minister’s office and registered his preference for the 12.5 acre land located adjacent to the Krishnanagar Government College ground at the heart of  Krishnanagar town.

After visiting the land Chatterjee categorically said, “This is land is better of the other lands which are under consideration for the dream project”. “Moreover, this land is owned by the state education department and a better choice on communication aspect”, he added.

Sources in Nabanna said, in last month the Nadia district administration sent a proposal after identifying a 14 acre land for the proposed Kanyashree University in Godadanga area located under ward 5 of Krishnanagar town. The land is used as dumping ground by the Municipality authority. However, sources claimed that Nabanna told about its reservations about the land as it is located at the outskirt of the town.

An officer in Nabanna said, “We preferred a land preferably located in such a place so that it can be well accessed by roads and rails. So we told officials to check more lands”. Ashim Kumar Saha, chairman of Krishnanagar Municipality said, “We took Parthada to a land adjacent to NH12 for the proposed university. However, he did not like it. Finally took him to the land adjacent to the Government college ground, which is locally known as Gabtala ground. After visiting the land physically and its map, he given his verbal nod as a preference over the others”.

Speaking to reporters the education minister said, “We have short listed two lands for the proposed university. Out of which the land close to the Government College is better one from all aspects. I have liked the proposal for setting up the university on this land. However, it is the chief minister who would take the final decision”.

During August this year Mamata Banerjee announced about her intention for setting up of ‘Kanyashree University’.  In September state government announced that it would be set up in Krishnagar. In November 29, the Kanyashree University bill has been passed in the state assembly to pave the way for construction.