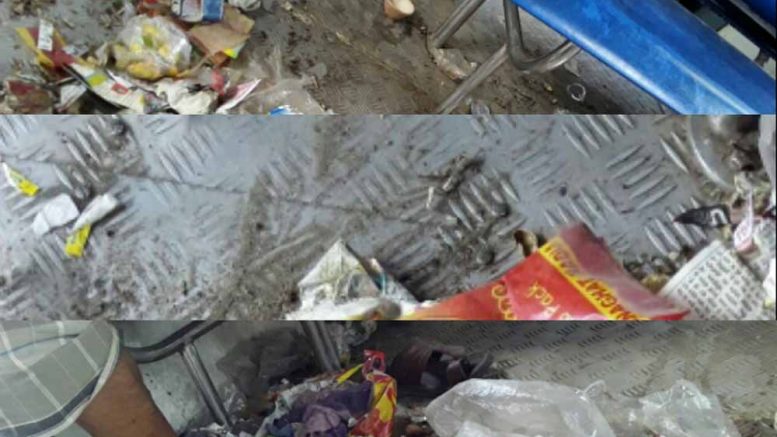 Ranaghat, Aug. 5: Daily passengers in Ranaghat today stopped a Sealdaha bound down Ranaghat local to depart protesting dirty compartments of the train. The passengers alleged that the compartments of the 31620-down Ranaghat local that departs for Sealdah at 8.35 in the morning used to remain filled with heaps of garbage everyday which forced them to travel in unhealthy atmosphere. Today the passengers as a protest stopped the train and said that they will not allow to depart the train until and unless the railways authorities clean the train compartments. Barun Santra, a state government employee, who is a daily passenger of the train said: “The Ranaghat local arrives everyday in Ranaghat from Sealdah at 8.20am and it departs for Sealdah again at 8.35am. But, it regularly arrives with heaps of dirt in every compartment. The train compartments are never cleaned and we are forced to travel with the garbage and dirt everyday. We on many occasions informed the station authorities but they never appeared to be bothered about the issue. On many occasions the passengers engaged sweepers to clean the compartments finding no way . But, it has become a regular embarrassment to the passengers and at the same time unbearable to travel in such unhealthy atmosphere. So as a protest and to settle the issue permanently we stopped the train today demanding cleaning of the compartments”.

As a consequence of the protest, the rail officials rushed to pacify the passengers and also arranged to clean the compartments engaging the officials sweepers. The station manager, however, refused to talk on the issue.

Officials said that the cleaning of the compartment is generally done in the car shed. But this train has little option as it gets no scope to visit the car shed as it leaves Sealdah early in the morning being parked at the station itself and again left for Sealdah within few minutes.