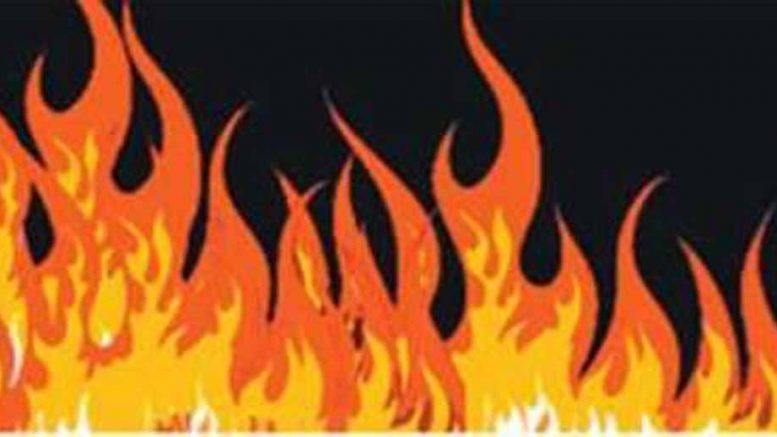 Ranaghat, Aug. 5: In a bizarre incident a man after a fight with his parents over a share of money poured petrol on them and set them ablaze in Rabonbor village of Ranaghat on Friday night. The 83-year old father Baidyanath Biswas, a farmer by profession, died on the spot while the 70 year old mother Saraswati Biswas earned serious burn injuries and fighting for life at JNM Hospital in Kalyani.

The fault of the elderly couple was that they refused to share Rupees ninety thousand with their younger son Abodh Biswas (39), which they received by selling some old sagoon trees.

The accused son Abodh earned burn injuries in the act and admitted to Ranaghat sub divisional hospital. Police have started a murder case against Abodh.

Trouble broke out yesterday afternoon on an amount of Rupees ninety thousand which the deceased Baidyanath received from his son in law towards selling of some matured sagoon tree from one of his orchards.

Abodh, who is the youngest of the four sons of the couple, raised objection as the elderly man decided to deposit the amount to his bank account. Police has started a murder case against Abodh on the basis of a complaint lodged by his third brother Subodh Biswas.

Local sources said that Abodh and his second brother Paritosh Biswas demanded their share from the money, which the elderly man refused.

The issue developed into an serious altercation late in the evening when Abodh out in anger sucked out petrol from the fuel tank of his motorbike and filled it in a bottle. He poured the petrol on his parents and set them on fire while they were taking rest in the evening.

“It was horrible scene as we could not guess that he could be so brutal just for a share of money. It was beyond our imagination that a man could kill his parents in this way. However, good sense came back in Abodh much later watching the parents dying in fire. He tried to douse the fire but in the way he caught with the fire ” – A neighbor.

All the three were rushed to Ranaghat sub divisional hospital, where Baidyanath was pronounced brought dead and Saraswati was transferred to JNM Hospital in Kalyani.

Abodh has refuted the allegation and also denied having set his parents ablaze. “I don not know how they caught fire”, Abodh said. He blamed his brother in law Jayanta for the dispute and accused him of intervening into their family matters. Jayanta said: “I never interfered in their family. I just bought the trees and paid the money to my father in law as he wished instead of handing over to Abodh and his brother who used to threaten the elderly couple for different reasons”.