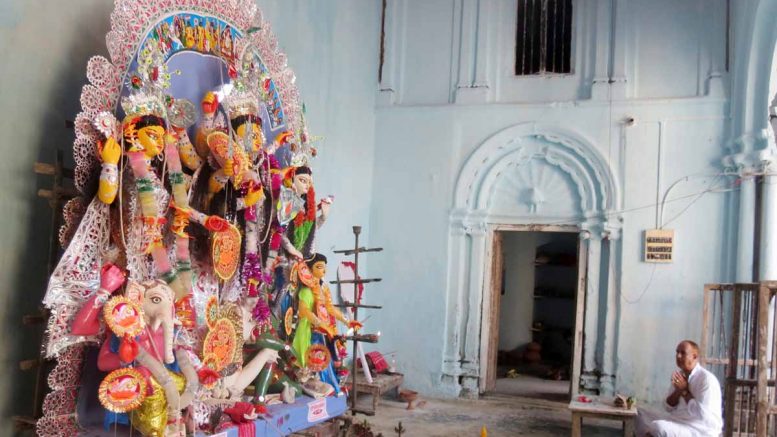 Karimpur, Oct. 18: 280 years old Durga puja of Bagchi family in Nadia’s Jamsherpur got a patriotic fervor during the early part of 19th century when the swadeshi movement had began. Poet Jatindramohan Bagchi was the driving spirit behind this fervor, who being one of the young members of the family, broke the tradition to epitomize goddess Durga as the ‘Bharat Mata’ while organizing the puja. His patriotic passion was so keen that the young poet had introduced Nobel laureate Rabindra Nath Tagore’s one of the prayer songs as a mandatory family ritual to be sung after immersion of Goddess on Dashami as a prayer to the ‘Bharat Mata’.

The patriotic ‘tradition’ introduced by young poet, who was a keen follower of Rabindra Nath Tagore, is still being followed by the present generations of the Bagchi family. On Dashami, even after about 100 years the new ‘ritual’ was introduced, members of the Bagchi family in Nadia’s Jamsherpur feel inspired to sing – “Ek Baar Tora Maa Boliya Daak/Jagat Joner Shraban Jurak//Himadri Pashan Kendey Goley Jaak/Mukh Tuley Aaji Chaho Rey”. Maloy Bagchi, Son of poet’s nephew, an employee of Food Corporation of India, who lives in Calcutta, said, “Poet Jatindramohan made this Tagore song an indispensable part of our family’s Durga Puja. On Panchami once all the family members gathered at our ancestral house in Jamsherpur, we began practicing the song. Even though it is sung after immersion on Dashami as a prayer epitomizing Durga as the Mother India, we all following the thought of the poet still consider the puja as prayer to the motherland. From Bodhon to Dashami we do not worship Durga, rather the Bharat Maa. It is our ‘Dadu’ injected this feeling to his next generations”.

Born on November 27, 1878 in Jamsherpur, Jatindramohan is considered as one of the most prolific poets of Bengali literature during and after Rabindra Nath Tagore. The poet, who was the editor of prominent literary magazines like “Manashi” and “Purvachal” until his death in 1948, was highly influenced by Tagore having close proximity with him.

influenced by Rabindra Nath Tagore’s patriotic passion. Tagore never actively participated in freedom struggle, but his works inspired many youths and Jatindramohan was no exception”. “So it is quite natural that he provided a patriotic fervor to the puja and used the Tagore song not just as a prayer rather as a call to the people so that they repose faith on the Bharata Maa, accepts her with whatever she has. It was mantra of the Swadeshi movement that united the people against the British imperialism and to boycott British rulers and their products protesting the partition of Bengal”, Mitra added.

The lyrics of the song are quite significant as it says “Aapnar Maa’ye Maa Boley Daakiley, Aapnar Bhaiye Hriday Rakhiley/Sob Paap Taap Durey Jai Choley Punnyo Premer Batashey”. The song was written by Tagore during 1886 as a prayer song for Brahma Samaj. But, it eventually became popular as patriotic song later during the Swadeshi movement. “We have heard from our forefathers that Jatindramohan’s father Harimohan was a great patron of revolutionary movements in Bengal. Many revolutionaries like Bagha Jatin on many occasions visited our house. So he happily allowed Jatindramohan’s thought to consider Durga as the embodiment Motherland and to allow him to include the song with immersion on Dashami. However, we could not know the exact year when he introduced the song. But, forefathers claimed it was during 1910-11”, said Tanmoy Kanti Bagchi, a member of present generation, who works as a manager with a financial company.

of the Bagchi family. For last several years, the local villagers also join the puja and the immersion as well with same patriotic passion. On Dashami, once sun descends, family members and the local residents take the deity to a local pond for immersion.

“After the immersion we all the family members and villagers walk back to a Kali temple while singing the song ‘Ek Baar Tora Maa Bolia Daak’. Once the song is over we offer our pranam to the deity, an epitome of Bharat Maa saying ‘Vande Mataram’. After this we begin the Vijoya celebrations”, said Maloy Bagchi.