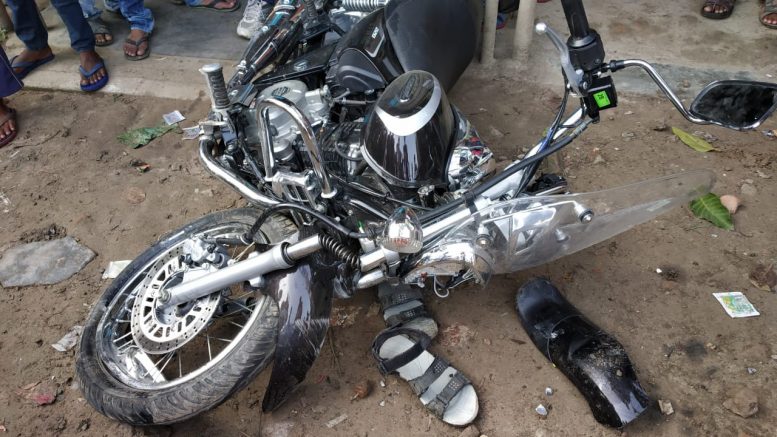 Karimpur, Oct 17: A teen aged motorcyclist was killed and two of his friends who were riding pillion had suffered fatal injuries when the motorcycle which they were riding rammed on a stack of concrete pillars in Kanthalia on Karimpur-Krishnagar road during the wee hours of Wednesday morning.

Deceased boy, Rajesh Hait (18), was a student of class XII in Nadia’s Palashipara, who was returning home with his friends after visiting puja pandals in Karimpur when the accident occurred.

Police said, preliminary investigation suggests that the trio was drunk and riding the motorcycle in high speed without helmets when they crushed on the stack of pillar in a bid to avoid a lorry coming from opposite direction.

Police rescued the trio lying on the road and took them to Karimpur hospital where Rajesh was declared dead on arrival. His two friends Pratik Pramanik (17) and Piklu Joardar (18), both high secondary students, were later transferred to Saktinagar district hospital in Krishnagar. Pratik, however, on Wednesday morning transferred to a NRS Hospital in Calcutta after his condition had deteriorated further.

According to police, the accident occurred at about 2am while Rajeh was proceeding towards home in Radhanagar-Gopinathpur village in Palashipara riding the motorcycle in a very high speed.

A police officer said, “It is quite unfortunate that none of the three boys had helmets on their head. If the deceased had worn a helmet he would have survive. He had suffered serious head injuries and was bleeding from nose and ears apart from a fatal injury on his chest. The other two boys also earned nearly similar injuries”.

In another incident that occurred near Baxipur ghat in Karimpur two persons were injured when a cyclist hit a motorcyclist apparently in inebriated stated on Tuesday night. Both the cyclist and the motorcyclist – Arup Halder and Nabakumar Halder were injured in the accident and admitted to Karimpur hospital.