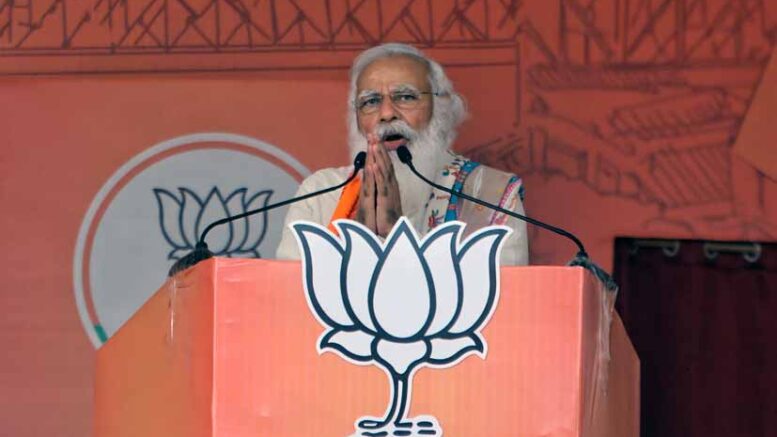 Krishnanagar, April 10: Prime Minister Narendra Modi on Saturday accused the ruling Trinamul Congress has been trying to unleash violence being afraid of losing the power. He also claimed that Trinamul chief Mamata Banerjee has turned angry on central forces because they are trying best to thwart attempts of violence and proxy voting as well.

Modi was speaking at a pre-poll rally in Krishnanagar Government College ground on in support of the BJP candidates nominated by the party.

“The people of Bengal have been suffering from your politics of violence. The central force personnel were deployed in four other states in the country to maintain law and order during the poll process. But it is Trinamul only which has been facing problem for their engagement in the poll. This is because the personnel have stopped the proxy voting”, Modi said in Krishnanagar.

Terming the Bengal Chief Minister ‘undemocratic’, he also cautioned her for not to create panic among people by unleashing violence. “You must keep in mind that this is 2021 and people will not allow you to go against the democracy. The more you would foment tension and unleash panic; people would be more united to defeat you. BJP is not the only force fighting against you; rather it is the people of Bengal fighting against you. They are at least running ten steps ahead to defeat you”, Modi said amid huge applause.