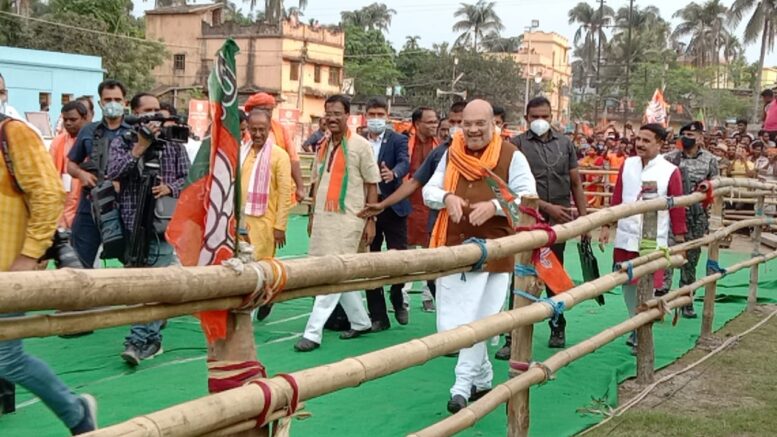 Amit Shah in a rally in Basirhat. Picture by Pashupati Das

Santipur, April 11: Union Home Minister Mamata Banerjee on Sunday slammed Bengal chief minister Mamata Banerjee demanding her apology for an alleged provocative speech in Coochbehar last week, which he claimed actually caused the Sitalkuchi incident. Shah alleged that it was she actually incited the people to attack the central forces, when they retaliated in self defence and killed four persons.

Speaking to the media persons in Nadia’s Santipur where he held a road show earlier in the afternoon, Shah said,“I would like to ask Mamatadidi a sharp question…wasn’t your speech that actually responsible for the death of the four persons yesterday? Had you not delivered such a speech the persons who died yesterday would not have dared to attack the personnel?”

Terming the death of four persons as ‘very unfortunate’ incident Shah accused Mamata for abysmally bringing down the ‘tradition and culture’ of Bengal politics.

Drawing a reference to her recent speech in Coochbehar in which Mamata had asked people to gherao the central force personnel in case they foment ‘troubles’ to the voters, Shah alleged, “A few days ago Mamatadidi delivered a speech in Sitalkuchi when she asked people to attack CISF, CAPF…”. He later added categorically making the Trinamul chief responsible for the attack, “I want to ask her a sharp question… wasn’t your speech responsible for the death of the four persons yesterday? Had you not delivered such a speech the persons who died would not have dared to attack?”

He ended up saying, “It is you only who actually incited people that led the firing. You still have time …I am hopeful that you would apologize for the provocative speech”.

Shah also accused Mamata for her politics of ‘appeasement’ while slamming her for not expressing her condolence for the bereaved family members of Ananda Burman – who was actually killed by the miscreants while waiting in a queue at a polling station in Sitalkuchi. The murder of Burman which actually fomented tension in Sitalkuchi area occurred prior to the firing by the central force.

“It is quite unfortunate that Mamatadidi shed her tears only for four persons died in firing, but did not bother to express her condolence for Ananda Burman. In death even she continued with her politics of appeasement…unfortunately she did not shed her tears for Burman, because he was a Rajbanshi, who are not probably her vote bank”, Shah alleged further.

“I hope she would rectify this mistake and express her condolence to the bereaved family of Ananda Burman”, Shah added further.