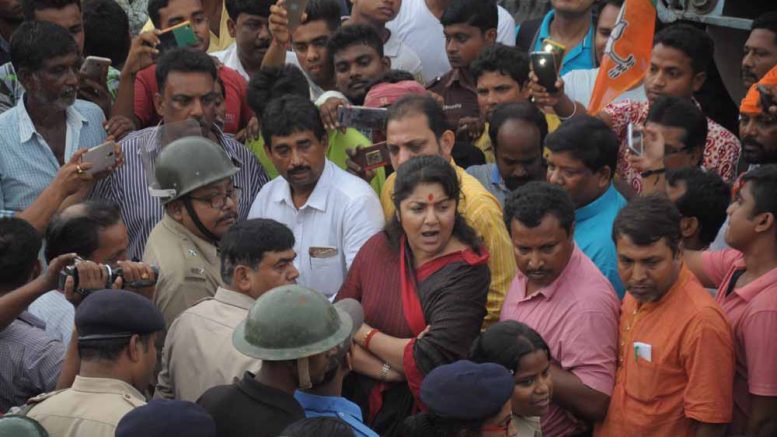 Bethuadahari, July 17: A delegation of BJP led by party’s women wing leader Locket Chatterjee today denied entry to trouble torn Sashthitala village in Nakashipara by Nadia police. The actor turned leader who has a scheduled public meeting today in Bethuadahari town was stopped at the Netaji statue square on her way to the disturbed village that has witnessed violence between two erring groups that allegedly flared up due to a hate post in social media that eventually forced the administration to clamp section 144. Even though it was withdrawn as normalcy being restored in the area, district police did not want to take any risk apprehending that the BJP leader’s visit to the village could create fresh trouble. Angry with the decision of the police, the BJP supporters blocked the NH34 for about an hour until the leader left the place for the schedule public meeting on persuasion by the police. Speaking to the media persons Locket Chatterjee said: “The police role is ridiculous. There is absolute normalcy in the area. The section 144 has also been withdrawn. There is no restriction in movement has also been imposed by the district administration, nevertheless, the police officers stopped me to enter the village. They could not show me any official or judicial order restraining anybody to enter or move in the area, nevertheless, police apparently acted under the instructions of its political bosses”. “A number of our party workers were beaten up in the village, there houses were ransacked and police have also arrested them to hide own fault. We just wanted to visit the house of those party workers and to talk to their family members, but police with political motive stopped me to enter the village only out of fear being afraid of loosing ground of the ruling party”she added further.