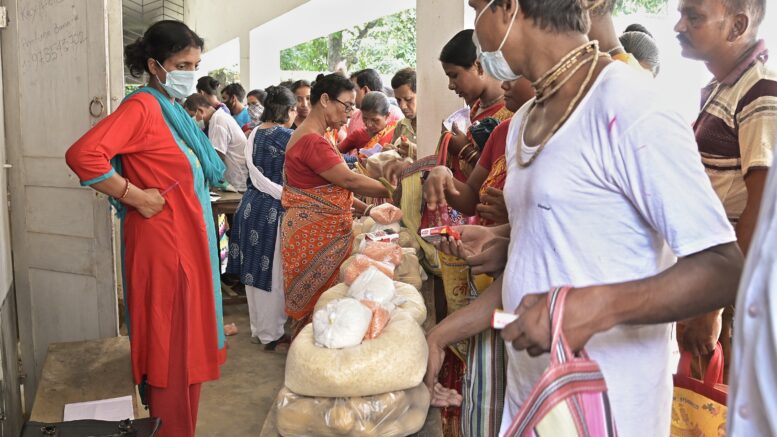 Krishnanagar, May 25: On a day the Chandramukhi variety crossed per kg price Rs. 40 and the Jyoti Rs.30, potatoes become the most coveted items to fascinate the parents on Wednesday when dry mid-day meal distribution for students for the summer recess began at schools across the state as per the state government directives.

With the soaring price of potatoes creating troubles in the kitchen,    teachers engaged in the distribution of mid-day meals the day, faced inquiries from parents whether 2-kilogram potatoes as announced by the state government were included in the package or not.

Teachers in most of the schools where mid-day meal was distributed on the day claimed that it appeared parents largely attended school to receive potatoes since its price has been pinching their pocket.

“Rice and potato are always the most sought-after items since the beginning of the dry mid-day meal distribution during Covid pandemic situation. But an unusual curiosity to know whether potatoes were being distributed as per the announcement by the government was witnessed among the parents”, Bijit De, a teacher at Radharani High School in Nadia’s Shantipur said.

“Line a dariye sobai aaj prathamei jiggesh korchilen aalo sarkari ghoshona moto deway hochhey kin a” (Once joining the queue everyone asked whether potatoes were being distributed or not as per government order)”, De said adding that the parents heaved a sigh of relief once we confirmed.

“Their curiosity was obvious due to the soaring price of the potato…”, he said.

On May 17, the School Education Department notified about the distribution of dry mid-day meals for the students from school during the summer vacation under its cooked mid-day meal programme.

In this phase, each student will receive Rice (2 kg), Potato (2 Kg), Sugar (250 Grams), Pulses (250 grams) and soap that have been included in the list for distribution. District Magistrates and other concerned officials in the districts were directed to procure the items from the local market except for rice.

But many school authorities found it tough to procure potatoes locally due to the steep price in the market. “We had to procure the potato at a high price even though the local administration fixed the rate at Rs. 28 per kg. So for obvious reason potato drawn the main attraction this time as 2 kg of potato handed over free of cost would provide relief to many families in the state”, a teacher in Basirhat of North 24 Parganas said.

Tapan Pramanik, 45, a weaver who stood in a queue at Sarat Kumari High School in Santipur, said, “The price of potato has gone beyond my reach. During the past one month, I have minimized its use. Today I came basically for the potato. 2 Kg potato given by the school authority would help my family a lot”.

An official in the state agriculture department said, “The untimely rain that damaged a big part of cultivation at the beginning of the production season during November last year basically created the problem. This created a shortfall in production of about 25 lakh tons, whereas the demand suddenly increased”.

“Till a few months ago potatoes were coming directly from the farmers. But at present most of the supply coming from cold stores, which is the reason for the hike in the price”, the official further added.

Meanwhile, the teachers apprehend that unless the price of potatoes records a drop, such enthusiasm to receive potatoes at schools would continue.