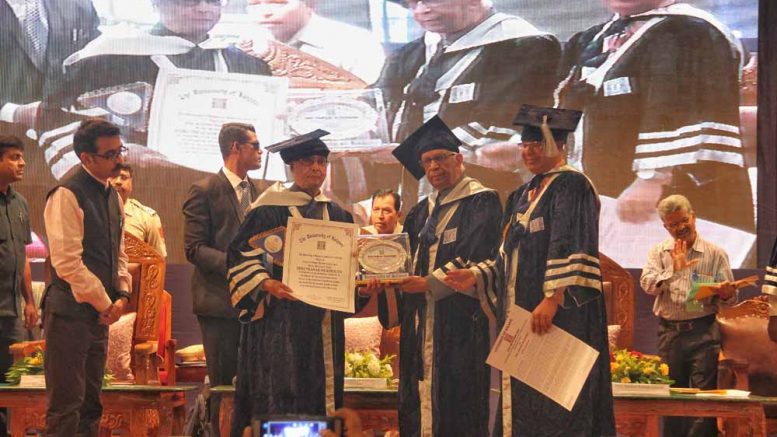 Kalyani, Nov. 1: Former President of India Pranab Mukherjee on Thursday said that research works in higher educational institutions in India are still ‘malnourished’ as the country still lack the ideal infrastructure and allocations of sufficient funds in education, at least 6% of the GDP, to meet the world standard in the field of research works.

The elderly statesman was speaking at the 29th convocation of Kalyani University at the APJ Abdul Kalam auditorium in Kalyani on Thursday where he was conferred upon the honorary DLitt by the University along with singer Kabir Suman and IIT Kharagpur Director Partha Pratim Chakraborty. He was awarded for his exemplary contribution in public service, governance and nation building.

Speaking at the occasion, Mukherjee attributed the apparent apathy among of the policy makers of centre and states to infuse sufficient public resources in education, a need which he reiterated always while as the Deputy Chairman of Planning Commission and as the former Finance Minister.

“…It was about 30 years ago when I was the Deputy Chairperson of the Planning Commission, during adoption of the 8th five year plan, I emphasized of spending of at least 6% of GDP in education. But unfortunately till today we, nowhere spent around 5% of GDP in the Universities and in all other forms of higher education”, Mukherjee said.

The former President of the country has urged the Universities and Higher Institutions to take up the matter with the centre and states so that they come up to inject more fund and develop the infrastructure to raise the standard of the research works and draining of talents to abroad. “We have four Nobel laureates, but none of them had done their research at any Indian Institutions…this is being happened every year as over a lakh of talented students leave India”, he said.

“The Government institutes should enhance employability…” he said. This is needed as importance of private education institutions have increased sharply as they offer job oriented technical education for students of middle and upper classes, he added.

Earlier he inaugurated a ‘Research and Innovation Complex’ at the University campus. This complex accommodates ten separate research units under the same roof with state of the art facilities.

Swami Atmapriyananda, vice chancellor of Ramakrishna Mission Vivekananda Education and Research Institute was present at the occasion as the special guest.

209 researchers were conferred PhD at the occasion. Apart from this 101 students were awarded with best medals and citations for their achievements in different subjects. Three students were also conferred ‘Vice Chancellor’s medals which include Suman Pramanik, a transgender. The other two students are – Ashtami Mandal and Abdul Jabbar, who are physically challenged. An over 838 students of under graduate and post graduate faculties were also awarded their degrees during the convocation.