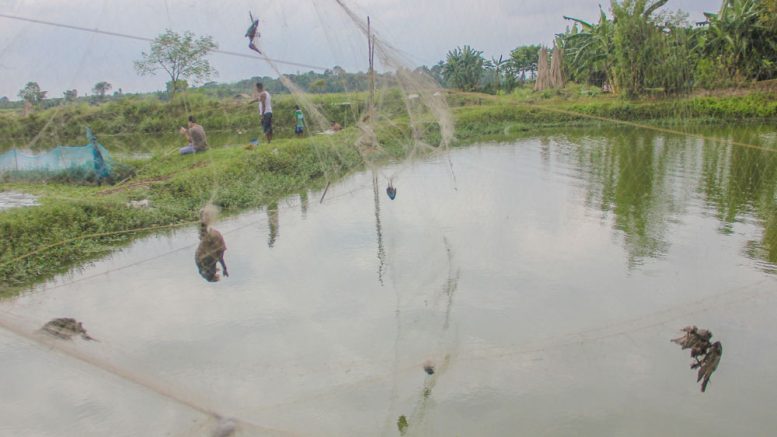 Dead birds entangled with fishing-net hanging over a pond in Santipur.

Krishnanagar, Nov. 1: Over hundreds fish-eating birds of different species are regularly trapped and killed being entangled in nets laid over ponds and wetlands by the fishermen to protect fish in several places in Nadia regularly.

While farmers claimed that they are compelled to use the net to protect the fish from the birds,  like common kingfisher, black cormorants, little egrets, purple herons, wild goose which are like predators to fish, nature care activists have alleged that such traps are inhuman and literally making the ponds as graveyards for the birds seriously damaging the ecological balance. A large number of spotted owls, an endangered bird, were also seen hanging dead in such nets over ponds in several areas of the district including Santipur.

As repeated persuasions by nature lovers failed to convince farmers to remove the nets in several areas in the district, a section of Nature lovers, who are attached to Santipur Science Club, have lodged a police complaint against Kartick Paul, a fish farmer in Santipur- Malopara accusing him of killing the birds. Police, although, yet to start a case into the matter, but asked the accused farmer to remove the net immediately.

In Santipur, accused Kartick Pal, who has been doing pisi culture on a stretch of a canal attached to Hooghly River, has laid a large fishing net for over a month to which several birds were entangled killed after they were trapped and injured.

Joint secretary of Santipur Science Club Subrata Biswas said, “This is sheer cruelty. It is quite natural that water birds eat fish. It is the natural system. But, birds cannot be punished in this way. We found that every day over a dozen of birds being trapped in the net laid by Paul. They are being died eventually, while some manage to escape with injured wings or leg.  They need to be protected. We tried to persuade Paul to remove net. But, as he refused to act we lodged complain against him with police. It is the duty if the police to protect the birds under the Wildlife Protection Act, 1972″.

Nature care activists claimed that Paul’s case is not the only in the districts rather several areas in the districts like Chakdah, Madanpur, Kalyani, Ranaghat, Dhantala, Dhubulia, Nabadwip, Tehatta where similar traps of net were seen on ponds and wet lands where pisiculture is done. In many areas nature lovers were also got involved into confrontation with the farmers.

Bibartan Bhattacharjee of Chakdah Biggyan o Sankritik Sanstha said, “Not only nets rather fine nylon threads are being used at parallel at equal gaps to combat birds. The birds cannot recognize these threads and either being killed or injured seriously trapped with such thread. This is horrible. We in many occasions able remove such nets and thread cover with help if local residents, but in many cases the farmers used their political clout to go on with their whims. Police and wild life department should interfere to stop this criminal offence”.

“They also often catch the trapped birds like goose and eat their meat”, he added.

An officer of state fisheries department said, “We always farmers involved in pisi culture to keep open the water surface as haunting of fish by birds never hamper fish production.-Generally at least 10% of fish released do not survives. Birds eat a very small part of it. Rather fish feed their excrete which helps in their growth”

Divisional Forest Officer (Nadia Murshidabad) Rana Das said, “I have no information that birds are being killed in this way. On behalf of the forest department we often organise awareness meeting in villages on such issues. We would take the Santipur incident. Awareness is primarily needed more than legal action. It will be helpful if the nature activists inform us if they find such nets anywhere that killing or trapping birds”.

An officer of Santipur police said, “We have told the farmer to remove the net at the earliest. Else action will be initiated against him”.

Bibartan Bhattacharjee said, we have appealed the Dakshinbanga Matsyajibi Samity to aware their members so that they are refrained from laying such traps.