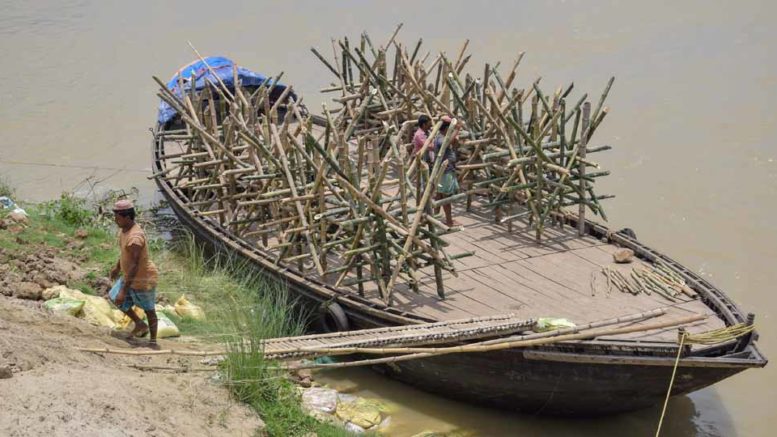 A bamboo structure brought for piling works in Santipur.

Santipur, June 27: The state government has taken up protective works in the erosion-prone areas of river banks in six districts so that a difficult situation likely to emerge upon due to monsoon could be tackled effectively. With the continued spate of intermittent rain that has led to fresh erosion in Nadia, Maldah and in other areas, the state government has begun bamboo piling works to protect the river bank from erosion which is advancing fast to embrace the residential areas.

In Nadia’s Santipur certain stretches of Hooghly river banks lost in different areas due to erosion that has started from last week, prompting the district administration to take up protective bamboo piling works in the vulnerable areas to avoid further damages. Local residents in areas under Belgharia, Methirdanga, Balirchar have alleged that random extraction of earth from the river bank by miscreants which made the areas more vulnerable to erosion. On Wednesday villagers in Balirchar area caught two mechanized boats laden with earth and sank one of it, when miscreants were trying to flee with it.

However, Nadia district magistrate Vibhu Goel who visited the vulnerable stretches on Thursday to monitor the execution of the protective works claimed that the ongoing spate of erosion is largely ‘natural’ caused due to the ‘meandering of river course’.

Speaking to the media persons the DM said that permanent protective work for the riverbank would begin after the monsoon.

An officer at the state irrigation and waterways department in Calcutta said in view of inundation due to heavy rain that might cause flood-like situation and heavy erosion of river banks, the district administrations have been advised protective bamboo piling works with sandbags. “We have advised it for at least six districts where erosion level is high and causes serious damage in case of high rainfall”, an officer said.

Nadia district magistrate Vibhu Goel said, “As per the advice of the state waterways department we have begun the temporary protective works. Today I personally inspected the works. Our aim is to effectively tackle the situation in the vulnerable areas in view of the monsoon”.

“Once the monsoon is over we will take up a permanent protective work in these vulnerable stretches”, the DM added.

The DM assured the villagers that the officers of the local administration have been directed to initiate strict legal action as per the law against those extracting earth illegally from the river banks.