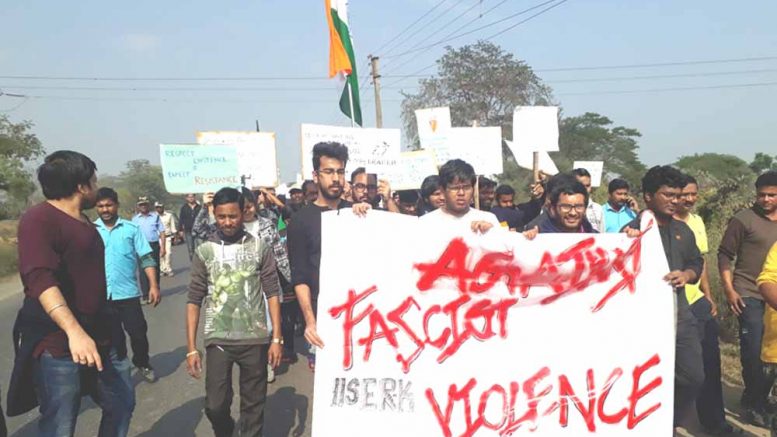 Around three hundred students attached Indian Institute of Science Education and Research -Kolkata {IISER K} walked along with students of some other premier institutions in Kalyani on Wednesday condemning the attack on students at the New Delhi’s Jawaharlal Nehru University (JNU) campus. The students came out of their campus and walked for about five km through the Balindi road, the NH-12 connector, with posters in their hand while raising their voices against the brutality unleashed on a section of students at the JNU campus on January 5 night. A good number of teachers of IISER-K as well as students of MAKAUT, Kalyani University, Bidhan Chandra Krishi Viswavidyalay, and some other institutions, had also joined the protest march with them. “There has been a spate of attacks on the students by fascist forces in different campuses across the Nation. This is absolutely unacceptable to us. Our country is a democratic one, where individual freedom and opinions are respected always. But, it is quite unfortunate that this ethos is under attack. To revive that spirit and to protest every unconstitutional move that is aimed to curb free voice and free-thinking, we have organized today’s walk”, a student of IISER – Kolkata said. Students across the country have been protesting against the Sunday’s attack at the JNU campus. At least thirty students with left-leaning, who were protesting against the JNU authority’s decision of fee hike, were beaten up by a group of masked men. Armed with sticks, rods stones at least 60 persons entered the campus, ransacked hostels and attacked the students there including girls. The viral video footage of the attack sparked shock and outrage among the students of different institutions not just in the country, but outside too.