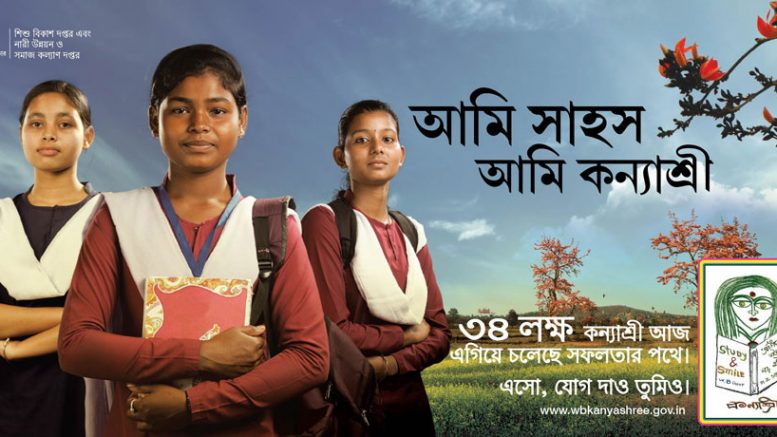 Ranaghat, Oct. 27: An inquiry by state government has revealed that at least ten Kanyashree beneficiaries of Ranaghat College in Nadia during 2016-17 financial year were actually middle aged married women from South 24 Pargana’s Basanti who never been to schools in their life.

Police have arrested Debajyoti Sarkar, a young computer operator hired by Ranaghat College on Friday night allegedly for enrolling these fake beneficiaries as its students to the ‘Kanyashree’ portal. His aide Prasanta Kundu, another computer hired by the college operator and a co-accused, who done the job jointly, however, managed to escape. The duo used to run a cyber cafe in Ranaghat town. The arrest was made on the basis of a complaint lodged by college authorities after an inquiry ordered by Nabanna revealed that ten beneficiaries enrolled with Ranaghat College, who were credited Rs.25000 during the 2016-17 financial year, were from Basanti in South 24parganas.

Kanyashree, a flagship beneficiary scheme for girl students, was launched in 2013 by Bengal Government, to prevent child marriage in economically weaker sections with an annual household income of Rs.1.2 lakh. Successful applicants got Rs.1,000 a year scholarship from 13 to 18 years and a one-time grant of Rs.25,000 on remaining unmarried till 18 years and above.

Sources in Nabanna said, the inquiry was initiated after some women from Basanti, who are age between 40 and 60 years,  had submitted a joint petition during July this year before chief minister alleging that three persons have used their bank accounts to credit benefits under Kanyashree  scheme without their approval and luring them for money.

“These women claimed that they had never been to school. Nevertheless, some unscrupulous person lured them for money to use their accounts despite their objection. The inquiry eventually found the route of the malpractice at Ranaghat College where these fake beneficiaries were actually enrolled. We are, however, looking into the role of these beneficiaries. The amounts credited to their accounts, were refunded to state exchequer. The Nadia district administration subsequently asked to conduct an inquiry and to take necessary legal action”, an officer in Nabanna said.

Sub Divisional Officer of Ranaghat Manish Verma conducted the inquiry. He, however, refused divulge details of his findings. “The allegations are primarily found to be true. I have conducted an inquiry into the matter and submitted my report to the district magistrate”, he said.

Insiders at the district administration said, the two computer operators hired by the Ranaghat College found to be

the prime suspects. Accordingly the college authority was directed to lodge specific complaints against the two, an officer of district administration said.

Principal of Ranaghat College Arup Kumar Maiti said, “In August this year the District administration through a letter apprised me that some fake beneficiaries were enrolled as students of our college to Kanyashree portal. The uploading of beneficiaries was done by two outsourced computer operators. When they fail to justify how these fake entries were made, we lodged police complaints against them”.

Accordingly on August 28, the college authorities lodged complaints against Debojyoti Sarkar of Roynagar and Prsanta Kundu of Rupasree pally, at Ranaghat police station.

An officer of Ranaghat police said, “A case has been started against the duo and one of the accused was arrested. They were charged for forgery”.

Debajyoti was produced before additional chief judicial magistrate’s court in Ranaghat which ordered four day’s police custody for him.

A police officer said, “Preliminary investigation revealed that the fake enrollments were done on forging principal’s signature. Moreover, forged off line forms were used to upload data of the beneficiaries. All these are apparently done by the duo deliberately winning confidence of the college authorities “.

Investigating officers, however, at the same time did not rule out involvement of a college staff. “Involvement of a third person became evident. We are scanning his role and will be arrested if required’, an officer said.

SDO Ranaghat said, “Such a corruption could be avoided if the principal was careful enough”.