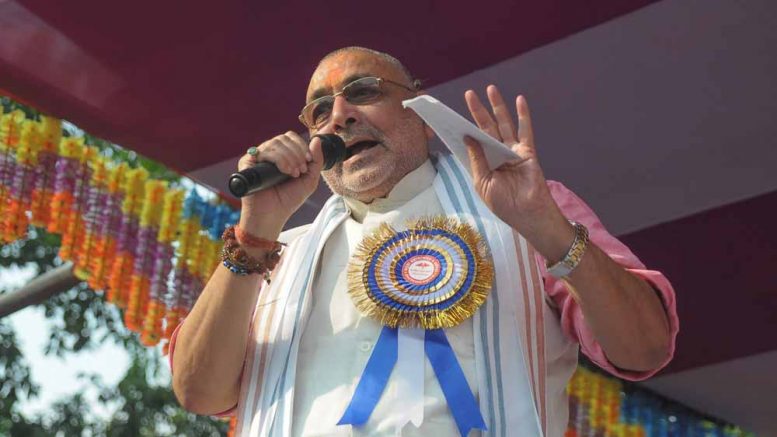 Krishnaganj: BJP leader and union minster Giriraj Sing has demanded that centre should consider introducing an uniform law to stop people having more than two children irrespective of their religious faith and identity, it should rob their voting rights and initiate legal actions for punishment.

While speaking at a religious meeting in Nadia’s Krishnaganj organized by the Matua Mahasangha, the union minister of state for micro, small and medium enterprises said, “A law should be framed in the country to control population. Be it Hindu, Muslim, Christian, Sikh, Jain, Buddhist everyone should have maximum two children. If the Hindus have two children, Muslims should have two without prejudice. The violators should be booked under the law and their voting rights should be robbed”.

The minister also advocated that the law should also have provisions to put financial embargo on the violators.

“The authorities should enforce embargo on the benefits they enjoy under different social welfare schemes and legal action should be initiated against them to ensure punishment”, Sing said amidst huge applause by a strong crowd of Matua community members of about ten thousand.

Even though Sing claimed that he is making the demand for the law without any prejudice knowing that a report that says that 20% of world population live in India, he expressed concern over the decreasing population of the “Hindu” community.

Clarifying his points, he said, “It is a fact that Hindus are decreasing in the country. But, I am not advising Hindus to have more children, but raising the demand for uniformity for sake of the country”.

“I am not against any community, but it is unfortunate that some people, who earn their living in this country, but think about Pakistan, are increasing in number. This should be stopped ….”, Sing added.