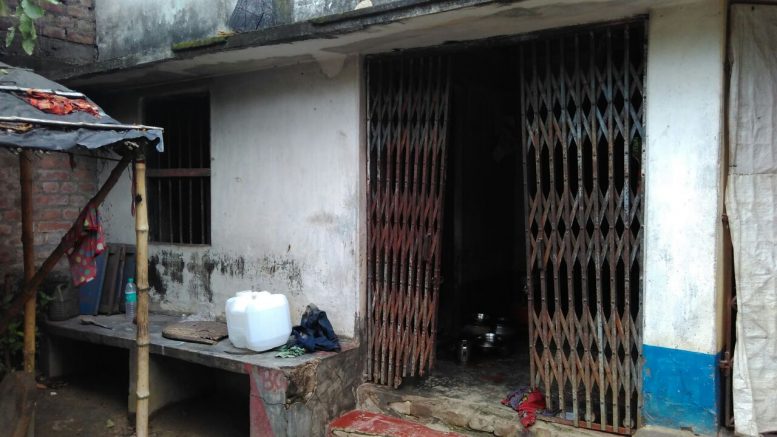 Tehatta, Aug. 7: A 25 year old deaf and dumb woman, who was allegedly raped by an elderly neighbor two months ago, was died after unidentified miscreants allegedly sprayed kerosene through a window and set her ablaze at her home while she was preparing for sleep in Nadia’s Betai last night.

Brother of the deceased victim has, however, claimed that the miscreants sprayed acid on her at about 11.50pm a little after she locked the grill gate and went inside her bed room at their residence in Natunpara where she had been staying with him since their parents died early in their childhood.

Victim identified as Sikha Das initially taken to Tehatta sub divisional hospital, but transferred to Saktinagar district hospital in Krishnanagar during the wee hours of Sunday morning where she succumbed with 85% burn injuries.

Police has started a murder case on the basis of a complaint lodged at Krishnanagar police station by victim’s brother Prasenjit Das, against the accused an elderly neighbor who allegedly raped her and his three brothers for their suspected involvement into the matter.

Prasenjit said: “I suspect that my sister has been plan fully murdered by the rapist and his brothers so that they could get rid of the pending police complaint. I suspect them because the three brothers of the accused, who went absconding, have been threatening me and my sister of dire consequences unless we withdraw the complaint. So I suspect they threw acid on my sister and killed her”.

The investigating officials of Tehatta police station, have, however, so far got no credible evidence corroborating the alleged acid attack.

The sleuths have recovered a container of kerosene and burnt match box from the spot.

Nadia Additional superintendent of police (Rural) Tanmay Sarkar said: “The circumstantial evidences suggest that the woman suffered burn injuries due to a fire caused by kerosene. We have also found spilled over kerosene in the room where the alleged attack occurred. During the preliminary investigation no sign of acid was found. Rather black spots of burning flames were found on the ceiling of the room. We are, however, yet to conclusively say whether the burn injuries were caused due to fire or acid attack as alleged. The exact cause of death can only be ascertained once the autopsy and forensic test is done”.

Deputy CMOH and acting superintendant of Saktinagar district hospital Sudip Sarkar said: “The symptoms of the burn injuries suffered by the victim have resemblance with fire burns. However, the exact nature and cause of the burn could only be ascertained in a forensic test”.

Additional SP (Rural) Tanmay Sarkar said: “We have talked to the doctors at Tehatta and Saktinagar hospital that have experienced smell of kerosene from the victim’s body. We are now examining how she caught fire”.

Victim’s brother said: “Last night I was watching television when my sister cried out in pain. I found her in blaze. I doused the kerosene with water and took her to Tehatta hospital with the help of neighbors. Her entire body except face suffered burn injuries. She was later transferred to Krishnanagar for better treatment”.

“I could not see any miscreant, but I suspect the attack could be fallout of the complaint against Sudhir Biswas (55), who raped my sister and absconding”, victim’s brother Prasenjit said.

Local sources said that on June 5 evening; the deceased woman was raped by Sudhir Biswas, an elderly neighbor at his home, whose wife died six months ago.

The accused confessed his crime when caught by locals and agreed to give a three cottah land and Rupees forty thousand in cash in compensation.

But, on the next morning he went absconding. The victim’s brother later lodged complaint at Tehatta police station.

The three brother of the accused started threatening the woman and his brother of dire consequences unless the complaint was withdrawn.

“The officer on duty discouraged me and refused to register any complaint against the three brother of the accused rapist”, he said.

ASP Tanmay Sarkar said: “I have no such information. The investigation into the alleged rape has been going on. The accused has been absconding. We are trying best to nab the culprit soon. At the same time the suspected role of the three brothers behind the death of the woman is being looked into.”