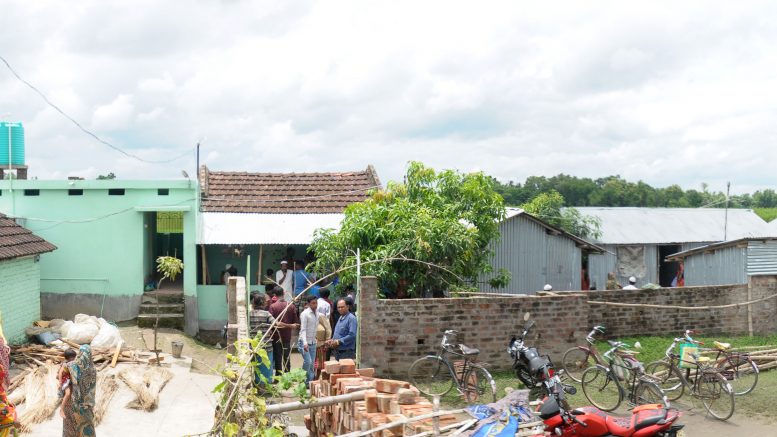 Chapra, Aug. 5: Two teen aged students of a Madrasa that imparts religious education died of snake bite in its hostel in Nadia’s Chapra on last night. Another student of the Madrasa who was also bitten by snake has been fighting for life at the intensive care unit of Jawaharlal Nehru hospital in Kalyani where he was shifted early today morning.

The teachers of Dar-ul-Ulum Mahmudia Madrasa located in Sikra village of Chapra, around 32km from Krishnanagar, have alleged negligence against the attending doctor of the Chapra block hospital authority where the students were initially rushed in last night as they were not administered the mandatory life saving anti venom serum (AVS) despite its availability, rather referred to Saktinagar district hospital after preliminary treatment.

Iqramul Mondal, a teacher of the Madrasa who accompanied the students said: “The attending doctor at the Chapra hospital administered an injection and saline and referred the children to Krishnanagar as he refused to take any risk. We lost about an hour in the process to reach district hospital in Krishnanagar and the boys died barely within half an hour since they were administering the AVS there”.

Even though the authority did not lodge any formal written complaint, the Chapra block medical officer (health) Ranabir Saha has ordered a probe on the alleged negligence in treatment.

The deceased students were identified as Shakil Mandal (14) and Abdul Qadir Mondal (12) both residents of Bangaljhi who were bitten by a poisonous snake while sleeping on the floor in the school hostel in the intervening night today, Nadia additional superintendent of police (rural) Tanmoy Sarkar said. The other student fell ill in snake bite was identified as Shamirul Gharami (12).

The Dar-ul-Ulum Mahmudia Madrasa, located on an agricultural land enclosed by jute fields in Sikra village, exclusively imparts religions education has 75 students in the age group of 10 to 18 mostly belong to very poor families, who all stays in the hostel rooms made of corrugated sheet over cement concrete floor.

Madrasa sources said that the children went bed last night at about 10pm. At about 12.30pn, some students cried out in pain from their slumber. The teachers who were in a different room also rushed in to check as well as the local civic police volunteers who also joined hearing the sudden commotion at the madrasa.

Iqramul Mondal, a teacher said: “The three students who were sleeping on a room were crying in pain. The told me to have bitten by insects. But examining the bite marks I realized that they bitten by snake. The civic police volunteers helped us to arrange a vehicle and we rushed to Chapra block hospital. But, the doctor there transferred the children to Krishnanagar where they later died”.

Alauddin Mondal secretary of the Madrasa said: “The children could have survived if the Chapra hospital authorities took proper care. The attending doctor appeared to be in a hurry and transferred the children without checking the bite marks properly”.

Teacher Iqramul Mondal said: “We told the doctors the boys were bitten by snake, but the doctor could not find out any bite marks. We are very afraid as the bite spots were in difficult zones of the body like below the elbow, ear lobes, shoulder where no bind was made possible. We told the doctor about our apprehension that poison might have spread and administering AVS is important. Nevertheless, the doctor referred them to Krishnanagar”.

Attending Doctor Anup Kumar Raha, however, rubbished the allegations. He said: “The persons who accompanied the children to the hospital never told me that they were bitten by snake. They only said that the boys were bitten by inspects while sleeping on the floor. Moreover, there were no visible bite marks on the body. I examined them in detail and then administered some injections and saline and referred to Krishnanagar to avoid any risk and for better management”.

Block medical officer of Chapra Ranabir Saha said: “I have talked to the doctor and taken note of his statement about the condition of the children. Nevertheless, I will personally investigate the matter and submit my findings to the chief medical officer of health, Nadia”.

“The block hospital has sufficient stock of AVS with well equipped doctor. We often administer AVS to snake bite patients. So there was no logic to avoid administering the AVS to patients”, the BMOH added.

Bibartan Bhattacharjee, secretary of Biggyan of Sanskritik Sangha, who has been rigorously making awareness campaign on snake bite said: “We often found that many doctors avoid administering the AVS. They often become afraid of the outcome of the patient. A fear factor works in their mind. As a result many snake bite victim died only due to negligence and due to such fear factor of the doctors, which the administration should take care of”.