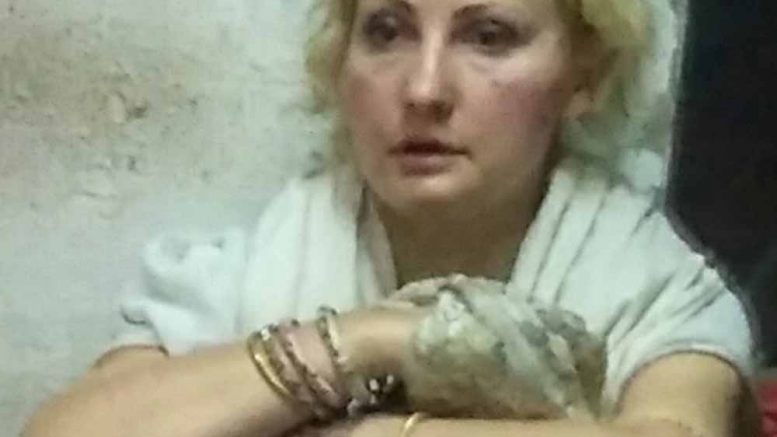 Olga after arrest in Nabadweep

Police said that the accused Russian woman identified as Olga Mazahara, who adopted Vaishnabism and renamed as ‘Champaklata’ had allegedly beaten up Maria Dzlebakowski, alias ‘Keerti Mataji’ at the Nrisinhadev temple inside the Iskcon premise on Monday morning.

Local sources said, the Russian woman in last month in the same way attacked a devotee inside Iskcon premise.

Sources at Iskcon temple said that the 35 year old lady devotee from Russia, who is associated with a Vaishnab temple in Nabadweep but often visits the Iskcon temple in Mayapur.

On Monday morning she visited the Nrisinhadev temple, when Maria requested her to give her space for prayer. But, Olga turned violent and started beating up Maria, an Iskcon source said. Security personnel rushed to rescue Maria and she later lodged a complaint at Mayapur police outpost.

“It appears that she has been staying in India without any valid documents. This is very concerning” – A Police Officer

On the basis of the complaint, police on Tuesday morning arrested Olga. She was produced her before a judicial magistrate’s court in Nabadweep, who ordered jail four day’s police custody for her.

Police have charged Olga for “voluntarily causing hurt” and for “wrongfully restraint” apart from under relevant sections of Foreigners’ act, 1946. Police said the accused Russian woman could not produce valid passport and visa authenticating her stay in India.

“It appears that she has been staying in India without any valid documents. This is very concerning”, a police officer said.

The Iskcon authorities also recently challenged her credential authenticating her stay in India. But, she in that occasion too failed to provide any documents. Sources in claimed said that it also written to Regional Passport authority appraising about unauthorized stay of Olga in India.