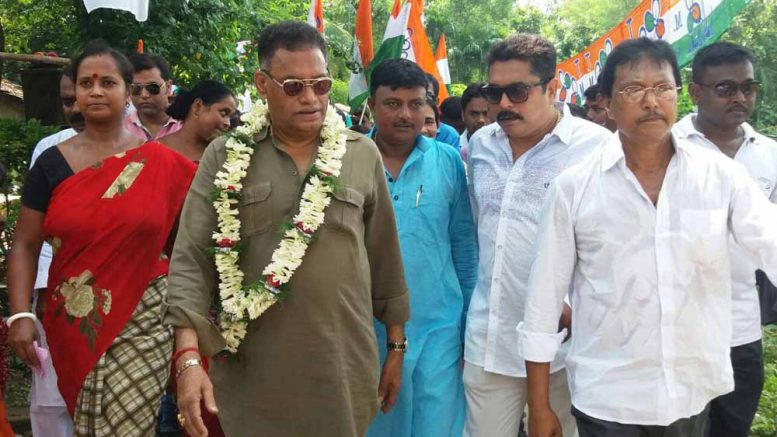 Coopers Camp (Nadia), Aug. 1: Sankar Singh today begins campaign for Trinamul Congress for its candidates in the ensuing civic poll in Coopers slated for August 13. The veteran Congress leader and Ranaghat North-West MLS, who in June this year joined Trinamul Congress today walked in small rallies in support of the party candidates fighting in the 12 wards. With the joining of Sankar Singh to Trinamul, the Congress literally ceased of its existence despite the fact that the party actually won in 11 wards in the last civic poll and ruled the town until all the councilors joined Trinamul Congress in November 2013. The situation has become so worst for Congress that for the first time since civil poll being held in the town, the party failed to nominate any candidate in this small town despite its predominant support base.

While the district Congress leadership attributed repeated intimidation by miscreants having proximity to the ruling Trinamul Congress as the reason behind party’s absence in the fray, Sankar Singh said that people no more interested about Congress as the party has become “insignificant” as a whole.

“It is quite shocking to see that a nationalist party like Congress bears no more significance in the public mind. It has been suffering from a leadership crisis and gradually becoming weaker day by day. It has no leader to inspire young workers. If there is any threat or intimidation by the Trinamul Congress supporters, the BJP candidates would not be in the fray. They are fighting in all the 12 wards”, Sankar singh said.

“People are in favour of development and against any sort of communal disturbances. These two factors would work enough to make the Trinamul Congress candidates victories in the ensuing poll”, a confidant Sankar added further.

The Coopers Camp civic witnessed first civic poll in 1997 since it formed. The town has 12 wards. In all the previous elections Congress won the poll and formed the board cashing on Sankar Singh’s personal charisma. The town has 15000 electorate at present.

Political observers feel that Trinamul’s victory in the civic poll is already a foregone conclusion as except BJP which has a very thin support base in the town, no other party is set to take the challenge against the ruling party. The CPI (M) could not nominate candidates in all the 12 wards.

A local in Coopers said: “In Coopers Sankar once symbolized Congress. Now he is no more with Congress, so people lost interest about Congress. This is not just the situation in Coopers, rather with Sankar’s departure; the Congress in Nadia has literally become a sign board now”.