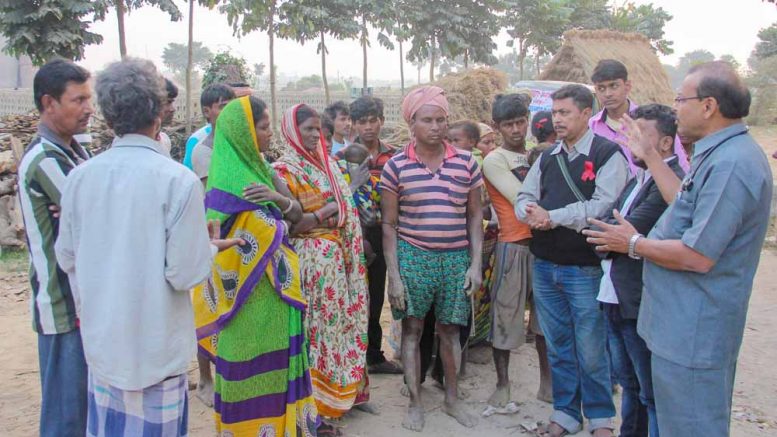 Santipur, Dec. 1: A social organization which works to educate children of brick kiln laborers in Santipur took some doctors of Santipur state general hospital, to the brick kilns and several villagers including Nrisinhapur where 12 persons died after consuming illicit liquor so that the laborers and villagers could listen from the doctors about their observations while treating their near and dear ones who died or fell ill last week.

The initiative was taken by “Nabajagaran”; a Santipur based social organization, as part of its awareness drive on hooch among laborers, which it launched on Saturday.

To begin with the members of Nabajagaran took some doctors of Santipur state general hospital, who treated the hooch victims   to brick kilns in Kalitala, Guptipara ghat, Nrisinhapur so that the narrate the unbearable pain leading to death which they witnessed.

“Our objective was to make a situation so that the laborers could directly hear from the doctors, interact with them freely and understand about the fatality of consumption of the illicit liquor. We requested the doctors to accompany us in our endeavor and to explain their observations to the villagers”.

Sibaji Kar, who treated the hooch victims and also led a medical team to the affected Nrisinhapur-Choudhurypara area, said talked to the villagers and advised them to give up their addiction for sake of their family members.

Kar told the villagers, “As a human being it was tough for me to witness the unbearable pain and the body burn your near and dear ones suffered. As a doctor I tried to save their lives, but many of them died. So never put yourself to suffer such pain”.

Since Tuesday night 12 persons died consuming spurious liquor and around 40 fell ill. At present 25 persons admitted to different hospitals in Nadia and Calcutta.

Kar said, “The hooch contains methanol otherwise known as methyl alcohol or wood alcohol. It damages the optic nerve and fatal enough to kill a person in high concentrations”.

The awareness meeting which were organized in small groups drawn huge gathering as many women come up and vow to form groups to make vigil on sale of liquor and to make the male members aware about the fatality.

Rewanti Mahato said, “We will try our best to convince our men so that they don’t drink hooch again”.

Budhua Mahato, a laborer said, “Deaths in Choudhurypara opened our eyes.I learnt a lot today from doctors. I have decided to quit drinking. It is tough. Nevertheless, I have vowed not to drink again”.

Minister Ujjwal Biswas said, “We have also launched an awareness drive among the villagers. The social organizations’ role here is also important. We have also engaged the Asha workers to interact with villagers and to encourage them giving up addiction to hooch”.