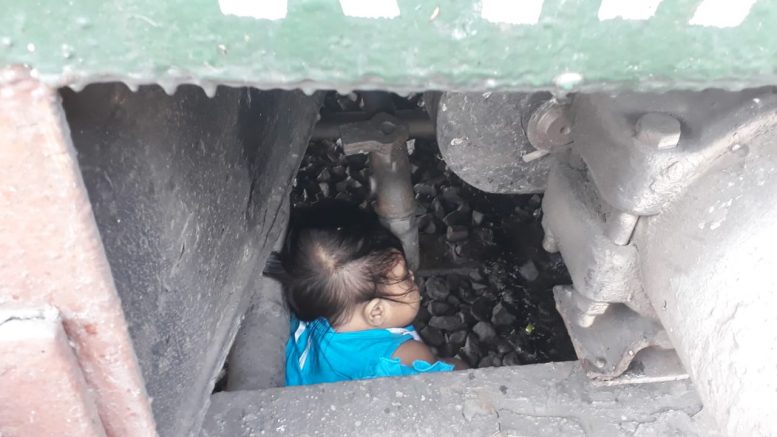 Khardah, Dec. 3: Body of a six months old female child got entangled to the cow-catcher of the engine of a Lalgola bound EMU train and could be recovered around 54km away in Ranaghat after it hit her and her father while he was crossing railway tracks near Khardah railway station in North 24pargana district on Monday morning.

Father and Daughter, Biswarup De (41) and Dhritismita died instantly as they were hit by Lalgola fast at about 10.45am.

Biswarup’s body flung and fell a few meters away close to the track due to the impact while Dhritismita’s body disappeared mysteriously. Some passengers noticed her stuck to cow catcher hold of the engine when the train arrived at Ranaghat rail station an hour later.

The incident occurred when Biswarup, a resident of Rahara Mandirpara and a private tutor by profession was going to her elder sister’s in-law’s house crossing the railway tracks close to Khardah rail station taking her daughter on her lap. Eye witnesses said, “The deceased had already crossed two tracks, but could not notice the fast approaching train on the third track as most probably his vision was obstructed on the right side as he held the baby on his right arm. The train hit him before he could hear our alarm. His body fell aside but child’s body went missing’.

The GRP officials informed Biswarup’s family members who rushed to the spot and identified the body. But, when they inquired about the Dhritismita’s whereabouts, the GRP official had no answer.

“This prompted us to begin a search which ended in Ranaghat as the child was found entangled to the cow catcher.dead. This was very shocking”, A GRP officer said in Khardah.

GRP officials recovered the child’s body and sent back to Khardah for post mortem later. It also questioned the driver of the train at Ranaghat station.

Family sources said, Biswarup left home after tuition taking a break to visit his sister’s house. “He took tea and left home with daughter at about 10.15am…but when after a long time we kearnt tag he did not visited her sister’s s house, we became anxious. He was not responding to calls. We began a search when GRP and some local people informed us about the bizarre incident”, a relative of deceased said.

Biswarup’s wife Chandana, a primary school teacher, was crying inconsolably when she was informed about the incident.

“He was soft-spoken and very nice person. As a tutor he was very popular among students. It is quite unbelievable that he could along with the daughter in such way”, said Alpana Banerjee, a neighbor.

Superintendent of Railway police, Sealdah Ashes Biswas said, “This not clear how exactly the man and her daughter have died. We have started an investigation into the incident”.