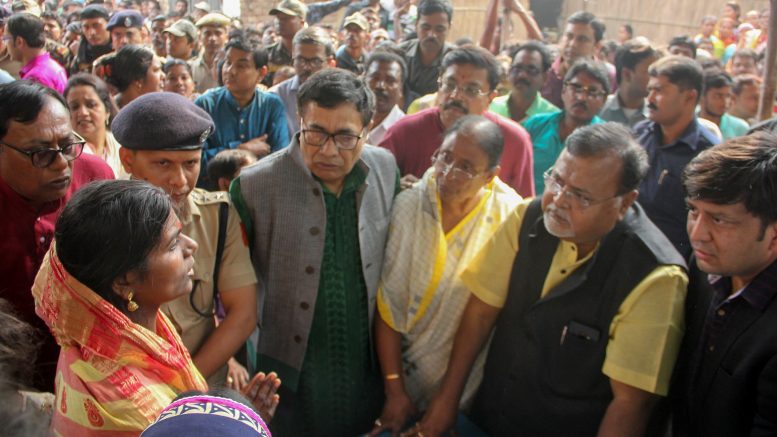 Bhagirathi Mahato and other women speaking to minister Partha Chatterjee

Santipur, Nov.30: Over a dozen homemakers of Nrisinhapur village in Nadia’s Santipur who lost their family members in the hooch tragedy have urged state education minister Partha Chatterjee on Friday in folded hands to impose a complete ban on sale of all types of liquors in the state to save lakhs of families from distress.

Some women had also categorically told the minister that the loss they have incurred due to death of their family members cannot be compensated by money the state government has paid to them, rather by banning the sale of all types of liquor in the state.

The homemakers urged Chatterjee when he went to meet the villagers with an objective to make awareness among them about the fatality of consumption of hooch. In the meeting Partha told the homemakers, “Why don’t you try to convince your family members about the danger of the hooch…..”

In reply Bhagirathi Mahato and others said, “Sir we tried a lot. Sometimes they stop drinking for few days…but the abundant supply of liquors in the area lure them to resume drinking…We also tried to shut down the hooch dens…but they threaten us. They also claim that police and ministers are in their pockets as they pay them money…Sir we have been fade up. You better stop selling of liquors. Not just the hooch…but all types of liquor in the state, because many families are in distress”.

Bubunia Mahato, who lost her son Dular Chand in the tragedy said, “What would I do with your compensation Sir…our sons and husbands are no more…will you be able to bring back them? How would we spend the rest of our lives? Our earnest appeal to you is that ensure such an action so that liquors are not sold any more”.

When Chatterjee assured the women that state government would ensure dismantling of the hooch dens, the homemakers protested. Bhagirathi Mahato said, ‘Sir we are not speaking about the hooch…rather about all types if liquor including your licensed liquor, which has also similar threat and damaging many families”.

As the demand raised in chorus, making Chatterjee visibly embarrassed, Nadia zilla parishad chief Rikta Kundu pushed them away outside. Later the homemakers made similar appeal to BJP leader Mukul Roy, when he visited Nrisinhapur village along with party’s National secretary  Kailash Vijayvargiya. Family members of Dhulichand Mahato appealed Roy to take measure so that sell of liquor is banned. The BJP leadership, however, earlier categorically demanded complete ban on sale of liquors in Bengal.

Speaking to reporters Roy said, “Today in categorical terms we demand complete ban on sale of liquors similar to states like Bihar, Gujarat and some other state. In Bengal 278 persons died during Trinamul rule so far.  The death is increasing as the state government has  almost made sale of liquor a free trade spoiling youths in tube state”.

Earlier Trinamul workers tried to prevent the BJP team to enter Santipur town and later to the village. They also had shown them black flag.

Meanwhile, the district administration distributed cheques of compensation to next to kin of nine family members at a programme in Santipur hospital. Family of deceased accused Chandan Mahato, however,  was not paid. Payment for two victims from Kalna and Jharkhand will be made later.

Police on Friday morning arrested Ganesh Halder for selling hooch in the village. He was taken to police custody.  Six more persons were meanwhile admitted to hospital as they fell ill. Their condition is however, stated to be stable, doctors said.