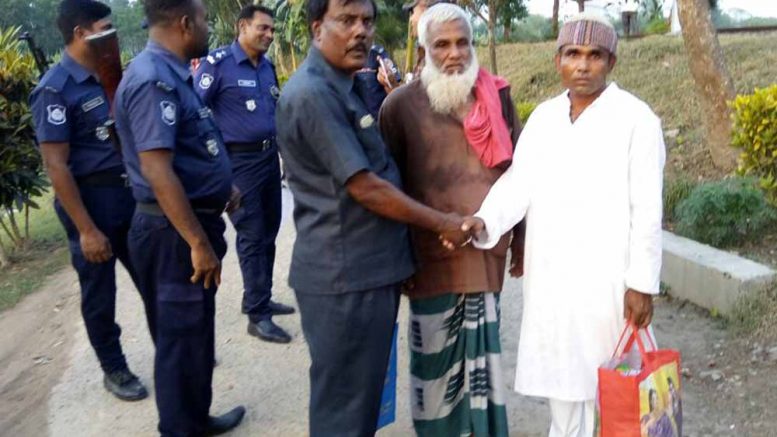 Gede, Nov. 19: Two years ago Mohammed Mamunur Rashid (37), a farmer from Rajsahi in Bangladesh, was found loitering in Mahatpur village of Nadia’s Chapra close to Indo-Bangladesh border. His clothes tattered and his memory was lost. A patrolling team of Border Security Force caught him and handed him over to Chapra police.

Today, Rashid, was reunited with his father Mohammed Abdul Karim at Gede-Darshana access point on Indo-Bangladesh border as he was officially handed over to his father, by the district police and BSF authorities in presence of Moslem Munshi, who gave him a new life taking his care during the past two years.

Rashid, who lost his memory and became schizophrenic apparently after he lost his mother a few years ago, was picked up by BSF’s 81-battalion on November 1, 12015 and sent to Nirmal Hriday by police, a home for the mentally challenged in Galaydari village of Nadia’s Nakashipara.

The home is run by Moslem Munshi, a 55-year-old group D employee of a sericulture farm who helps heal mentally challenged people with support of benevolent donations of many individuals and organizations.

During the last two years Rashid was under treatment at Nirmal Hriday and now a fully cured man.

Today he broke down seeing his father Mohammed Abdul Karim after two years. Tears also rolled down on the cheek of Karim, who embraced Rashid with a big hug.

Karim said: “Rashid was severely shocked on demise of his mother. An inconsistency developed in his character. I took him to a psychiatrist in Dhaka. But, he left home one night suddenly. I lost hope all hopes to get him back again. But, I was surprised a few months ago when I received a letter from Moslem Bhai with details of my Rashid. He has done a miracle. I am thankful to him.”

“Rashid has symptoms of schizophrenia. But, Munshi has to be praised as he worked hard so that it does not develop. Apart from counseling and medication, Moslem involved Rashid in domestic works, gardening and that worked well to divert his hallucinations and his disorganized thinking” – Dr. Debasish Dasgupta (Psychiatrist)

Moslem Munshi, whose passion is help mentally challenged person to heal up and sent them back home, recounted how he treated Rashid.

“He used to behave violently and had attacked me on a number of occasions. Gradually, he responded to medicines and counseling sessions,” Munshi said.

Rashid, who cannot remember how left home and sneaked into Indian Territory, said: “It is a great feeling. I cannot remember when I last saw son Saukat. I just cannot wait any more to meet him and resume normal life”.

Psychiatrist Debasish Dasgupta, who treated Rashid, said: “Rashid has symptoms of schizophrenia. But, Munshi has to be praised as he worked hard so that it does not develop. Apart from counseling and medication, Moslem involved Rashid in domestic works, gardening and that worked well to divert his hallucinations and his disorganized thinking.”

“Rashid, however, needs continuous treatment as the problems could recur,” Dasgupta added.