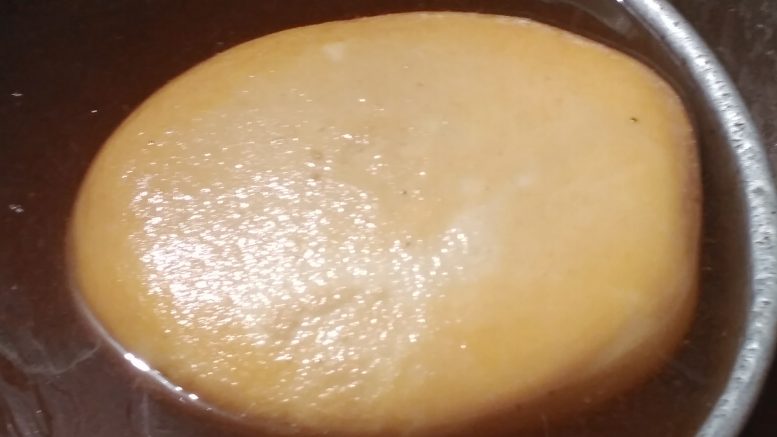 Phulia, Nov. 20: To mark Bengal’s win over Odhisha securing the Geographical Indication tag of Rasogolla, a social organization in Nadia’s Phulia made giant Rasogolla weighing about 8kg on Sunday night.

The members of the Junior 100 foundation, who organized the celebration at the same time, paid their tribute to Haradhan Mandal, a confectioner from the town, who is said to be the inventor of this unique sweet delicacy.

It took about six hours for four confectioners to make this giant Rasogolla using 5.5kg flour mixing 200grams of flower. The rounded dough later dip boiled in juicy syrup prepared of 150kg of sugar. The entire

“We have used 720kilogram of timbers (Bel, Babla and Sagoon) as fuel to boil the syrup in a giant Kadai of 8-ft diameter for three fours”, said Sujit Biswas, one of the confectioners who prepared the Rasogolla.

Cultural secretary of Junior 100 Abhinaba Basak said: “There are two marked reasons that made us proud and we celebrated it in this way”.

“Our state Bengal has deservingly won the battle against Odhisha being the pioneer of making Rasogolla. This success delighted us. At the same time, being the residents of Phulia, we felt proud for Haradhan Moira, a resident of this small town who will be remembered for ever as the inventor of Rasogolla”, Basak added.

Historian Sanjit Dutta, who wrote several books: “There are several names associated with Rasogolla being its inventors. It could not, however, so far conclusively identify anyone as the actual inventor of Rasogolla. References in old literatures written by many authors, however, indicate that Haradhan Mandal of Phulia was the pioneer. One such article is ‘Luchi-Tarkari’ written by Kshitimohan Thakur (1901) and another written by Panchanan Bandopadhaya (1906) who identified Haradhan Moira of Phulia as the inventor of Rasogolla sometimes during 1845-55. Nabin Chandra Das actually popularized the sweet and also introduced the spongy white Rasogolla during 1868”.