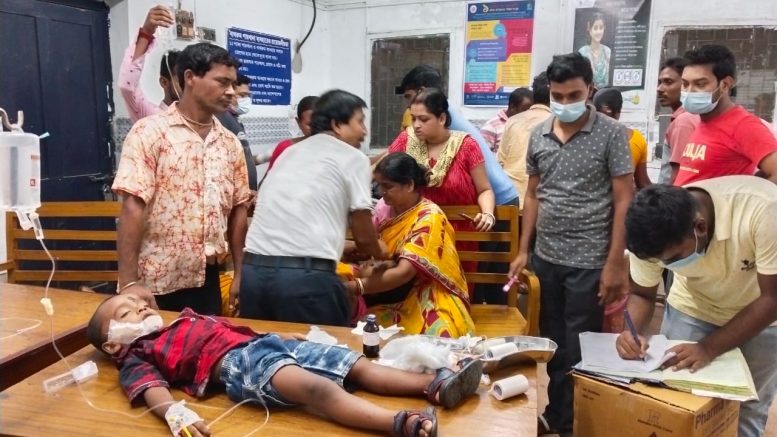 An injured child under medical treatment at Karimpur hospital. Picture by Ashis Pramanik

Karimpur, Aug. 06: A pedestrian was killed and at least 8 persons including two children and a civic police personnel were injured when a Hyundai i10 apparently lost control and hit a lamp post before ramming onto a stationary autorickshaw near Mahishbathan market on the Krishnagar-Karimpur state highway on Saturday evening.

Police and local sources said that the sedan was heading towards Karimpur at a high speed on a rain-soaked street which led to the accident that occurred at about 7.30 pm.

Local residents and traders rescued the injured persons and took them to Karimpur rural hospital, where Chandradeb Biswas, 46, was declared dead. The deceased person was a farmer by profession, family sources said.

Badal Biswas, brother of the deceased said, “My elder brother was speaking to some persons standing on the footpath in the market area when the vehicle ran over him after hitting an autorickshaw”.

An attending doctor said, “Most of the injured persons have multiple injuries that include the two children…. The deceased had a fatal head injury that led to his death”.

Police seized the killer vehicle. However, the driver managed to flee.