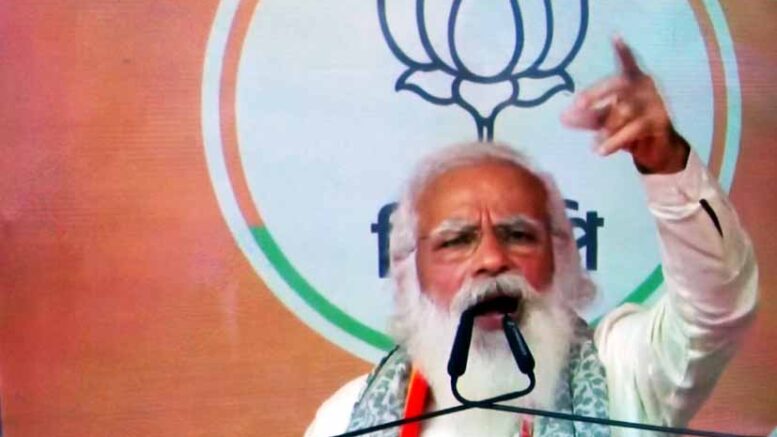 Kalyani, April 12: Prime Minister Narenda Modi on Monday alleged that the Trinamul Congress had conspired ‘Chhappa’ voting in Sitalkuchi engaging the miscreants which apparently led the bizarre firing when confronted with the central force personnel. He alleged that the entire episode was actually a master plan, a part of the ‘master plan’ hatched by Trinamul Congress to ensure ‘Chhappa’ voting in the area.

Accusing the Trinamul Congress of fomenting tension in Sitalkuchi, Modi said preventing people belonging to the backward community was part of a conspiracy. “Apprehending defeat in the election Trinamul has taken a strategy to prevent people from voting and to ensure chhappa vote (fake votes) by miscreants.”, he added.

“This is a new strategy to prevent people from voting, particularly the people belonging to the backward classes. At the same time, it is unfortunate that she has been openly asking his people to gherao the central force personnel son that the miscreants use the opportunity to go inside the polling station to cast chhappa vote”, he alleged

“She realised that the huge percentage of voting could become dangerous to her. So she did not utter any words cautioning the miscreants that any attempt to foment tension would be dealt with strongly”, he further alleged.