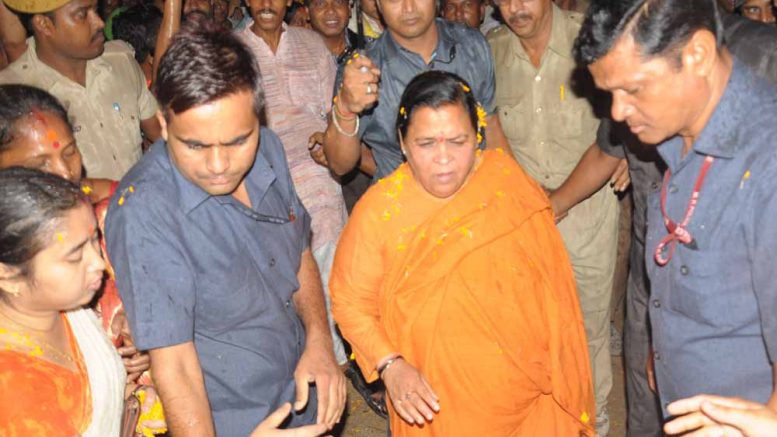 Nabadweep, May 28: Union minister for water resources, river development and Ganga rejuvenation Uma Bharati today expressed her concern for discharge of waste and blood from the slaughterhouses those have mushroomed along the embankment of river Ganga in and around Nabadweep town. The minister was shocked to state that the wastes of these slaughterhouses have been polluting the water of Ganga and needed to closed or diverted immediately.

Speaking at a programme in Manipur ghat of Nabadweep she said: “I don’t know how these slaughterhouses were allowed on the Ganga embankment. I don’t know how old these are. I don’t know if these are legal ones. But these slaughterhouses needed to be closed immediately. They have been regularly draining out the blood and waste to the Ganga. This cannot be continued. If these are legal ones and cannot be closed, then they should divert their discharge”.

The minister visited the Nabadweep town on Sunday as part of her ongoing 15days’ tour that she set of on May 25 (Thursday) from Gangasagar to inspect execution of the Centre’s ‘Namami Gange’ program. Her tour will end at Gangotri in Uttarakhand.

The objective of her tour is to amplify efforts to clean up the heavily polluted Ganga River.

In Nabadweep she offered Arati at the Manipur ghat and addressed a small gathering.

Speaking to the media persons the minister also alleged that waste also being discharged through sewerage system of Krishnanagar town. She categorically told that this needed to be stopped and a treatment plant should be installed for this purpose.

“We have allotted Rupees 1000 crores or Namami Ganga project for Ganga in West Bengal. Some of the old works will be completed by this fund. There are some new works to be done for which the feasibility report of the conditional assessment has been prepared and works will be jointly taken up with the West Bengal government. We have requested the state government to provide land and data based information. The centre will bear 100% cost of these projects”, the minister said.

She also said that any work proposed by the state government for cleanliness of the river will be taken up by the centre.