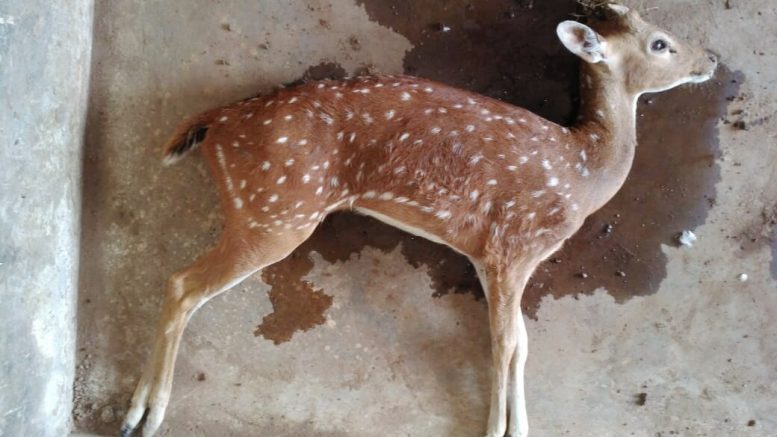 Nabadwip, July 3: A 12 years old spotted deer died at a Vaishnab temple premise in Nabadwip town apparently due to illness on Monday morning. The state forest department sent a team to the Sri Chaitanya Saraswata Math in Kelerdanga area of the town to conduct autopsy and a probe to find out if any negligence occurred in keeping the animal. Temple sources said that on Monday morning, an official first found the deer lying dead inside a fenced enclosure. The temple authority informed forest department, which sent a three member team led by veterinary surgeon Santanu Saha of Nabadwip veterinary hospital for the probe and post mortem. Saha, however, refused to disclose the finding of the autopsy. He said, “We will submit the report to the Divisional Forest officer for further investigation. However, I can only say that the atmosphere inside the fenced zone where the deer are kept are not at all conducive for their living. The food offered to the animals are also not good enough”. The temple authorities around 12 years ago brought 24 deer to keep inside a fenced natural zone with approval of the forest department. Divisional forest officer Rana Dutta said, “I have directed the temple authorities to submit the documents in support of the special approval for keeping the deer. At the same time, I have told the probing team to see if find out if the deer was died due to negligence. I will only be able to speak about the reason behind the death after receiving the reports’.