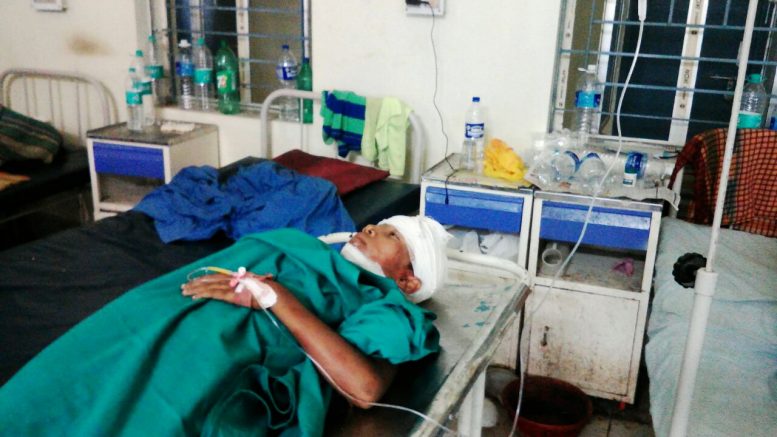 Kalyani, Sept. 19: A polytechnic student died today morning and his teen-aged friend of class nine was critically injured in Nadia’s Kalyani as they were hit by a train while taking selfie standing on railway track.

The incident occurred near a level crossing (T-42) in Anandanagar area close to Kalyani rail station at about 7.15am, when Sealdah bound down Krishnanagar local hit Rakesh Triguna (19) and Suraj Mandal (16) while they were taking a selfie photograph using their mobile phone with the fast approaching train in the back.

Repeated alarms rose by the driver of the train and friends of the two went into deaf ears as Rakesh died on the spot and Suraj earned severe injuries. Local residents took the duo to JNM Hospital where Rakesh was declared dead. Suraj was later shifted to NRS Hospital in Calcutta. JNM hospital sources said that Suraj has fatal injuries on his head and other multiple injuries.

A GRP officer in Kalyani said: “We have started an inquiry into the incident. It appears to be a case of accident due to sheer carelessness. However, preliminary investigation revealed that the both the boys were drunk. We have also found a cell phone, some bottles of alcohol from the spot”

Deceased Rakesh, a student of mechanical engineering, was a resident of Buxar in Bihar, who came to Kalyani to see his ailing father who works as a security guard to a private hotel management institute in Kalyani. On the other hand Suraj, son of Subrata Mandal, a mason is a resident of Ananda Nagar area, where father of the deceased stays at a rented house. Suraj reads in class nine at Sikhsayatan School in Kalyani.

Local sources said that Rakesh on Monday night joined Suraj and his friends for a feast to celebrate ‘Mahalaya’. During the wee hours they started celebrating by blasting crackers. But, as the sound of the crackers irritating the locals, they were asked to leave the spot.

Raghunath Mandal, a common friend of the due said: “While we were blasting crackers, Rakesh and Suraj were busy taking pictures. We were far away from the railway tracks, but they were taking selfies with the blasts in the back. But, when the signal turned green they decided to take selfie keeping the approaching train in the back. We tried to discourage them repeatedly. The driver of the train also raised alarm repeatedly.  However, they remained firm on the track and eventually could not move away to avoid the speeding train”

Kalpana Sardar, a maternal aunt of Suraj said: “We told the boys to keep quiet. But, they left the area. After about an hour some of their friends rushed back home and told us about the accident. When we reached the spot, one of the boys was died by the time”.