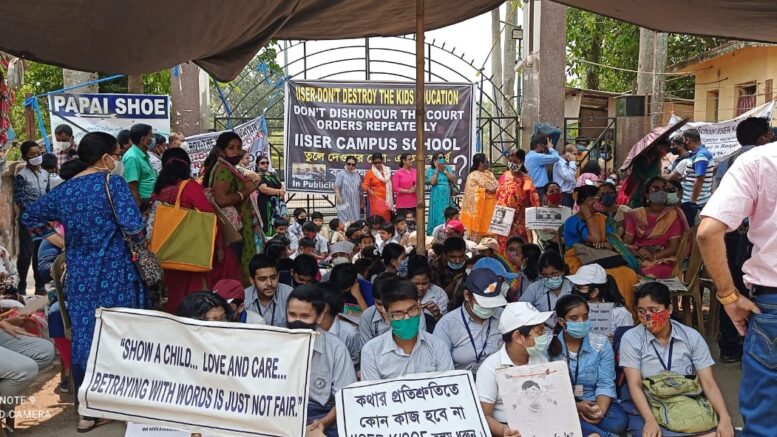 Mohanpur, March 23: Around four hundred students of Garden High School-IISER and their parents blocked the main entrance of the IISER-Kolkata campus in Mohanpur on Tuesday morning protesting its alleged inaction to settle the issue of the school’s affiliation that put the students in uncertainty.

The agitating students and their parents supported by local residents also blocked the NH12-Kalyani connector for about an hour and later entered the campus where they had a heated verbal exchange with the IISER Director Sourav Pal. Pal later accused the parents of “unruly behavior” and “assault”.

Police rushed to the spot and controlled the situation. The parents, however, continued to demonstrate further accusing Pal for an ‘inhuman’ approach and ‘misbehavior’ with them. The police officials later arranged a talk between the parents’ group and Pal, who agreed upon to constitute a monitoring committee for the ongoing cases consisting of parents’ representatives and faculty members.

Goutam Majumdar, father of a student, who is a physician by profession, said, “It is good that the Director has off late realized the magnitude of the problem and come up to constitute a committee. It is, however, too late since the Director being apathetic in approach failed to respect the emotion of the parents, who are seriously concerned about the future of their children in absence of the affiliation of the school. He should have taken a proactive role much ahead to resolve the issue being the head of the IISER-Kolkat who actually owns the school”.

However, Sourav Pal, IISER-K’s Director said, “The parents blamed me without reason. The issue of affiliation has become subjudice. I have nothing to do. Nevertheless, they today entered the campus and sought a talk with me. But, unfortunately they apparently tried to force me for an instant solution. They were behaving in an unruly manner and eventually attacked me. A woman had held my feet so that I fall back. But, I was lucky enough to escape unhurt”.

Parents rubbished Pal’s allegation. “The guardians are not criminal. Actually a woman, who is mother of a student had with tears in her eyes literally fell before Professor Pal and tried to hold his feet to urge for his intervention to save the future of the children”, Anirban Mukherjee, father of a student said. “It is unfortunate that the Director preferred to term it as an attack on him”, Mukherjee, an employee of a tech MNC said.

IISER-K insiders and the parents said that the contention developed during 2019 when the CBSE rejected its appeal for affiliation.

In 2015, the IISER-K had chosen the Calcutta-based Satikanta Guha Foundation (SGF) to set up and manage a school inside its campus for the children of its staff and local residents. But the CBSE rejected affiliation on the grounds that it had no boundary wall and the NOC issued by the IISER-K was not vetted by the MHRD. This had prompted the SGF to file an appeal before the Calcutta High Court in August last year.

The CBSE had further raised objections over the absence of registered lease deeds to reject the appeal, despite the

existence of a formal agreement between the IISER-K and SGF. The parents countered that as per the modified provisions of the CBSE’s affiliation by-laws, no such lease deed is required for schools managed by societies for central or public sector undertakings, or similar bodies.

On March 8, the Calcutta High Court has directed the Union Ministry of Education to reconsider granting provisional affiliation to the Garden High School-IISER in consultation with the CBSE. In his order Justice Shekhar B Saraf requested the union Education minister to look into this aspect “on a war footing” and also directed IISER-K, CBSE to submit their affidavit-in-opposition within 18 March.

However, the IISER-K authority allegedly failed to act before the deadline. Sources said that the affidavit was submitted on March 22.

“This proves the sheer reluctance of the IISER authority to end the litigation fast. It appears that CBSE and IISER have been deliberately skirting their responsibilities and lingering the litigation. They seem to be not at all bothered about the future of the students”, mother of a student alleged.