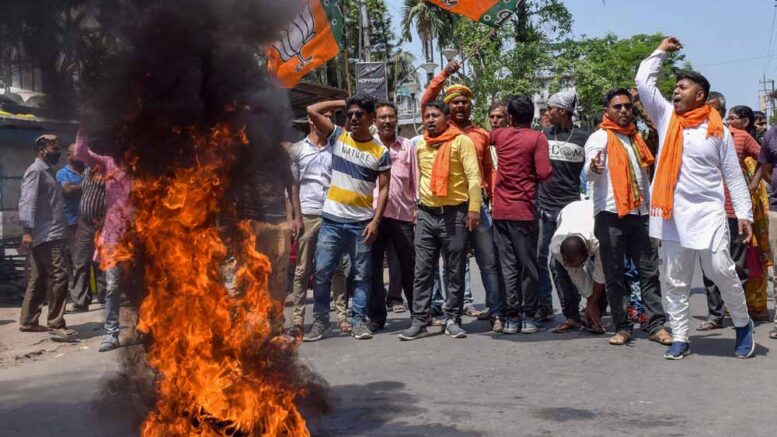 Santipur, March 25: BJP has called 12 hours bandh in areas under Santipur assembly constituency on Friday protesting the murder of two of its party activists by the miscreants with suspected Trinamul link.

BJP supporters turned violent body of Pratap Burman (25) and Dipankar Biswas (36), painters by profession, were found inside a banana orchard in Methirdanga village during the wee hours of Thursday morning.

Local MP Jagannath Sarkar, who is also BJP candidate for Santipur assembly segments joined the party workers to stage a demonstration in front of Santipur police station and blocked the Methirdanga road demanding arrest of the culprits. Announcing the bandh Sarkar said, “There will be complete bandh in Santipur assembly segment tomorrow. People will spontaneously protest the heinous act of Trinamul”.

Nadia Trinamul leadership, meanwhile, appealed people to thwart the bandh called by the saffron party. “We will be on the road tomorrow and help people who would like to keep their shops and establishment open”, a Trinamul leader said.

Police and family members claimed that the deceased duo left home early on Wednesday afternoon and did not return. The villagers found them lying dead inside a banana orchard with their face damaged beyond severely apparently being hit by dumb object.

BJP candidate Jagannath Sarkar said, “It was a planned murder by miscreants close to Trinamul Congress which has been trying to unleash panic among BJP workers being afraid of imminent defeat in the ensuing poll”.

Trinamul’s Santipur candidate Ajoy De said, “BJP leadership trying to incite tension for political mileage. Most probably the murders were fallout of any personal enmity and Trinamul is in no way associated with it. We have told police to conduct probe and find out the truth”.