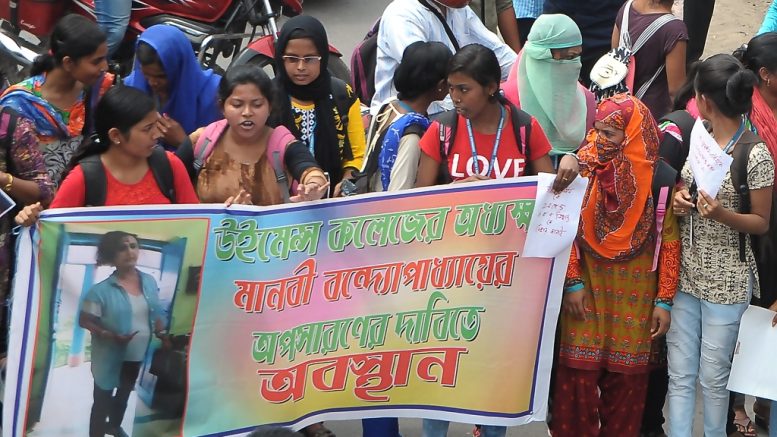 Krishnanagar: First transgender principal of India Professor Manabi Bandopadhyay has ignited a major resentment among the students and teachers in her college since she suspended a popular Mathematics teacher allegedly going beyond her jurisdiction. Condemning the suspension the students and teachers of the Krishnanagar Women’s College on Friday took on streets in the town and put road blockade for about one hour demanding cancellation of the order and her removal. The blockade was withdrawn after an hour only when the District administration revoked the suspension order, terming it as ‘illegal’ causing major embarrassment for Manabi.

On behalf of the state government District Magistrate Sumit Gupta, who is the administrator of the college, nullified the suspension order terming it ‘illegal’.  He also categorically told Manabi Bandopadhyay that she has acted ‘beyond’ her jurisdiction. Manabi, however, refused to withdraw the suspension order. Bandopadhyay in May 2015 had drawn attention of the National media when she joined Krishnanagar Women’s College being the first transgender to head a college in the country.

But, her relationship with the students and the faculty members of the college soured gradually. At present except one all 22 teachers are against her, who for over past one year do not enter the teachers’ room, rather sit on the corridor of the college protesting her alleged domineering behaviour.

The situation has taken such a passé that the teachers on a number of occasions met state education minister Partha Chatterjee seeking Manabi’s removal. However, the state government so far not responded to their appeal. Meanwhile, the teachers on a number of occasions observed cease work and also walked in protest rally in the town drawing attention of the state administration and local residents.

Manabi claimed that the teachers do not attend college regularly and often skip classes. “The teachers targeted me because I did not allow their indiscipline culture”, she claimed. However, the teachers refuted the allegations.

The recent trouble broke out on March 14, when Manabi issued suspension order for Assistant Professor Sudarshan Bardhan for “misbehaving” with her and with some non teaching staff.

This angered the students and the teachers of the college who walked in a protest rally in the town and later blocked road in front of the office of the District Magistrate condemning the suspension.

Suspended teacher Sudarshan Bardhan said, “The Principal has unleashed a terror in the college and humiliating teachers, often depriving them of their legitimate rights. She stopped salary of teachers on a number of occasions. She did not bother to process my confirmation case despite repeated appeal. She suspended me because I have been raising my voice against her illegal acts, which she could not digest”.

Students on Friday demanded removal of Principal Manabi Banerjee. A student who joined the agitation said, “Since she joined the atmosphere inside the campus has vitiated. There has been a constant conflict between her and the faculty members. The students are the ultimate sufferers. Today we joined the protest because the suspension order is illegal and prejudicial. We cannot allow this. There are several problems in our college including absence of basic facilities. But, she is little bothered about those things. We have had enough of her…it is better if she quits college with dignity”.

Principal Manabi Bandopadhyay said, “The Assistant Professor in question has been torturing me mentally for long. He often misbehaves with me and non teaching staff. He also instigates other teachers against me. I had written to District Magistrate seeking his approval to suspend the said teacher. But, he apparently so far could not communicate any decision. So I eventually compelled to issue the suspension order based on report of an inquiry committee. I will not withdraw it”.

District Magistrate Sumit Gupta said, “The principal has no authority to suspend any teacher. If any such necessity arises, I can take decision on it being the administration. The principal should looks after the academic part. However, I will talk to her so that normalcy restored inside the campus”.