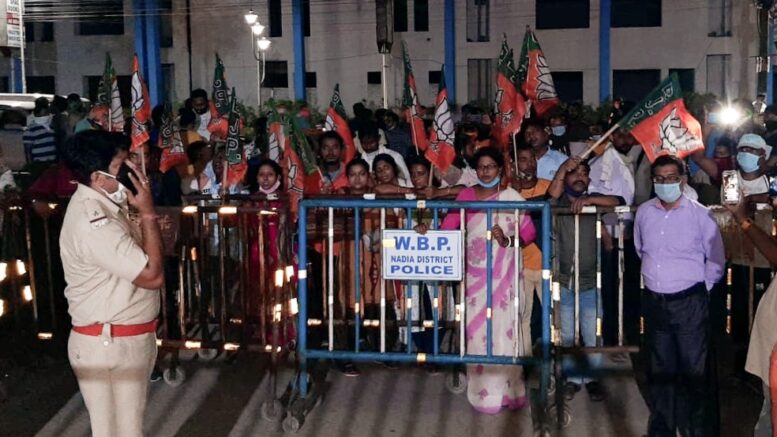 Kalyani, Nov. 1: The body of a BJP worker found hanging from a mango tree inside a deserted orchard in Nadia’s Gayeshpur created political tension on Sunday with the saffron party claimed the deceased as the latest victim of a spate of attacks on its workers unleashed by the ruling Trinamul Congress to terrorize ahead of the next year’s assembly election.

Condemning the alleged murder of their party activist Bijoy Sil, 28, a resident of ward 4 in Gayeshpur town who was the driver of an LPG cylinder delivery vehicle, the BJP supporters staged a demonstration in front of Kalyani police station on Sunday evening demanding the arrest of the suspected assailants, while the party leadership has called 12 hours bandh in the Kalyani assembly segment on Monday.

Meanwhile, Trinamul Congress leadership has rubbished the allegations claiming that the deceased was their party supporter and termed the death as “suicide”.

Kamli Sil, wife of the deceased, however, found no reason for “suicide” claiming that Bijoy escaped an attempt on his life when two miscreants had tried to shot him in the Bedibhawan area of Gayeshpur early this year.

“My husband cannot commit suicide…he was dedicated and working hard for the education of our children. But he was afraid of a fresh attack due to the repeated threat of some miscreants from the area. But, he never told me in detail what was the bone of contention with them”, Kamli said.

Kamli also could not confirm her husband’s political leanings. “My husband was very close to a BJP leader and often accompanied him…But I have no idea if he was involved with political activities”, she said.

Bappa Sil, a relative of the deceased and local BJP youth wing leader, however, said, “Bijoy was a Trinamul activist who joined BJP before the 2019 Lok sabha poll. Since then he was with the party. He was threatened on a number of occasions for switching over to BJP….’

According to family sources on Saturday night Bijoy left home being summoned by some friends but did not return home.

Early in the morning, local residents found him hanging inside the mango orchard with a “gamchha”. Police recovered the body and sent for post mortem amidst protest by BJP activists. The PM will be held in presence of a magistrate and video graphed.

“We strongly suspect foul play behind the death. The deceased was killed first elsewhere and hanged later. We came to know that the gamchha with which he was hanging was not his. Moreover, there was mud on his dress, whereas no such muddy ground was found near the tree from which the body was found hanging…All these indicate that it is a cold-blooded murder”, said a BJP leader in Gayeshpur.

BJP leader Subhrangshu Roy, who visited the house of the deceased said, “It appears to be the same way nearly hundred of BJP workers of grass route level were killed in Bengal during the past one year. Our workers are being killed and hanged…this is only to terrorize other workers. The ruling party has become afraid of regular erosion of support base and now adopted such a heinous way for its survival”.

Trinamul’s Gayeshpur town committee president Mintu De said, “BJP has been politicizing the death which appears to be a simple suicide. He was our supporter and never joined BJP. We are waiting for the post mortem report. We will answer all allegations once it is done”.