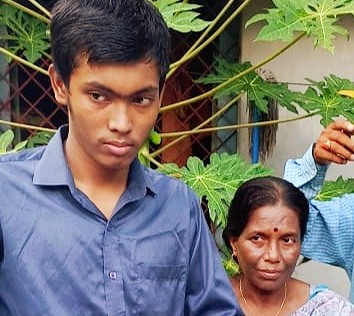 Baijayanta with his mother Apti

Krishnanagar, Aug. 4: A top official of Nadia administration, who refused to be identified. has given Rs.50000 to Baijayanta Bhattacharyya, of Sri Rampally in Nadia’s Chapra who ranked 6th in this year’s higher secondary examination, to help him pursue higher studies since he found it tough to continue due to serious financial crisis following the death of his father last year.

On last week Baijayanta, who secured 98.8%, received a surprising call from Krishnanagar (Sadar) SDO Manish Verma, who after eulogizing his achievement sought his bank account details and eventually paid Rs.50000 on behalf of the ‘anonymous’ official, whom he identified as a ‘special friend’, apart from a personal contribution of Rs.10000.

“SDO Sir asked about my ambition… But, I was quite reluctant to share my plan due to the uncertainty of the financial problem. But, he advised me to pursue the dream and sought bank account details where a day after he eventually credited Rs.50000 on behalf of his special friend along with his personal contribution of Rs.10000”, Baijayanta said.

The financial crisis cropped up for Baijayanta since December last year when his father, who had a grill manufacturing unit, died. Nevertheless, his mother Apti Bhattacharyya, a teacher with a private school tried best to continue his study with his paltry income of Rs.5000. But since the school authorities stopped paying her due to lockdown, it turned tough for him to pursue further education.

“After the HS result, everybody eulogizing my son for his achievement, but I was feeling helpless about his higher studies. At present, I have no income. In such a situation it is nearly impossible for me to continue to study. I so appealed to the local administration. The SDO Sir and his friends somehow came to know about this and sent such a big money for my son”, Apti said.

Baijayanta said, “Father’s death followed by suspension of mother’s paltry income discouraged me to pursue my dream for research in Physics at JU anymore. But, the gesture of SDO and his friend came as a ray of hope”

“I am just moved with their gesture. This is quite unbelievable. I will remain indebted with SDO Sir and his special friend for such generosity. I humbly tried to enquire about the identity of the Good Samaritan, but SDO Sir with an unmatched modesty expressed inability to disclose the identity of his special friend apparently due to his commitment”, added the Baijayanta.

SDO Manish Verma later sent a letter addressing Baijayanta’s mother Apti Bhattacharyya appreciating the success of her son and about the fund donated for her son by his special friend.

In the letter, Verma apparently quoting a sermon from the Holy Bible has written “This fund has been provided by a noble soul and my special friend…who believes in not letting his left hand know what his right hand is doing”.

“This is quite symbolic as it means don’t do something good with publicity in mind. So I cannot disclose the name of my special friend as he wished so. Both I and he believe to work in silence”, Verma said. “It is thus self-gratifying. We are hopeful that those who are befitted will make a similar gesture to others in future”, he further said.