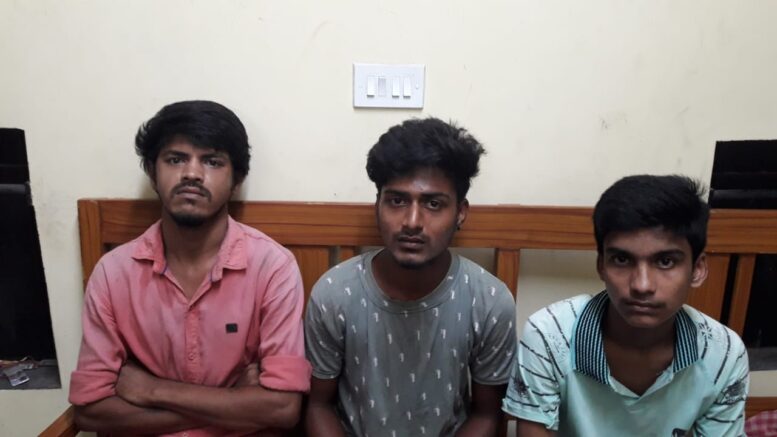 Ranaghat, Oct. 10: Police have arrested three youths on Sunday for throwing a street dog into the river Churni from a foot bridge over the river in Ranaghat town during a night walk on October 6 after a feast on the occasion of Mahalaya.

The arrest was made based on a video clip that one of the trio had filmed in his mobile phone and posted it on a social media platform that eventually went viral triggering an outrage in the town and other areas demanding their punishment.

Acting upon the public reaction, police began a case on suo moto basis against the trio, all residents of Ainshtala area of the town, and arrested them from their respective homes on Sunday morning.

The trio identified as Manoj Sarkar, Sona Sahani and Suman Sinha, who are in their early 20s, were charged under Prevention of Cruelty to Animals Act and produced before the Additional Chief Judicial Magistrate’s court in Ranaghat, which, however, released them on bail.

An investigating officer of Ranaghat police district said that the trio had apparently in an inebriated state dragged the dog to the foot bridge over the river while it was sleeping and then thrown the innocent animal into the river.

“They also snapped the entire episode in mobile phone…the video clip that was posted in social media and went viral suggests that it was shot late hours in night. It shows that one of the youths scoops up the dog in his arm and then flings it over the railing into the river. Afterwards they were seen smiling…” the official said.

“We eventually identified their locations of the three youths and arrested them. During preliminary interrogation they confessed of the cruelty on the animal which claimed to have committed just out of fun”, Additional SP of Ranaghat police district Rupantar Sengupta said.

Meanwhile, local sources claimed that the dog had managed swim back on the bank and survived. However, police officials are not sure about what actually happened to the victimized animal.

A dog lover in Ranaghat who has also pets, said, “This is a vicious act and a criminal offence, which deserve strong penal action. It is shocking to learn that such cruel people get bail”.

“The government should consider to amend such act and ensure that such people are never spared and show any clemency by law”, she added.