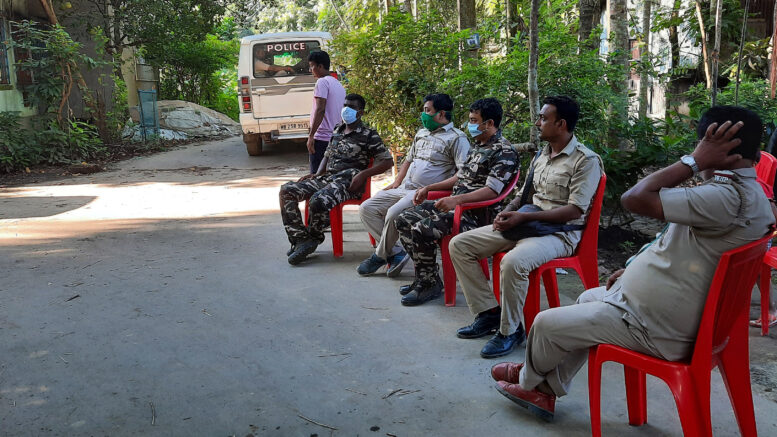 Hanskhali, Sept. 26 Four persons including a woman had suffered bullet injuries during a clash that occurred between the Trinamul Congress and BJP activists in the Kaikhali village of Nadia’s Hanskhali as the erring rivals fired indiscriminately against the other on Saturday night. ch include two each from BJP and Trinamul were rushed to Nadia district hospital in Krishnanagar, where a fresh clash occurred since a group of the ruling party workers led by a former MLA allegedly tried to prevent the family members of the injured BJP worker from admitting them.

The situation was, however, brought to control by police who dispersed the unruly Trinamul supporters and ensured admission.

The injured persons identified as Trinamul’s local booth president Shila Biswas, 51, her son Subhankar, 28 and on the other hand BJP activist Tapan Biswas, 53, and his son Debarshi, 29. District hospital sources said Shila suffered a bullet injury on her abdomen and shifted to a city-based private hospital, whereas Tapan Biswas and his son, who suffered bullet injuries on legs, also shifted to Calcutta, based hospital on Sunday.

Police have begun a case on the basis of two separate complaints. However, till Sunday evening no one was arrested in connection with the alleged firing. A large police team has been deployed to maintain law and order after the clash in the Kaikhali village where panic gripped the villagers due to indiscriminate firing.

Police and local sources said that trouble broke out at about 10 pm when Bimal Biswas, a BJP leader and teacher in charge of a local high school got involved in an altercation with Trinamul’s local booth committee president Shila Biswas over corruption in the distribution of cycles for students under the state government’s Sabuj Shree scheme.

Local sources said that Shila and aides accused Bimal Biswas of selling cycles meant for the students, which he vehemently protested and in turn accused them of hatching a conspiracy to malign him on behalf of the ruling party since it suffered defeat in the area in the assembly election.

The altercation eventually turned into an ugly scuffle when several rounds of gunshots were heard and four persons were found lying on the ground. Both the rival party leadership in the area accused the other of opening fire.

Trinamul leader and former MLA Samir Poddar said, “Our leadership had noticed that BJP leader Bimal Biswas being the teacher in charge of the Benali high school selling Sabuj Shree cycles registering fake students. Our booth president raised her voice last night after knowing about a fresh sale which angered Bimal. During an altercation, Bimal’s brother fired at her. Her son was also injured when he tried to save her”.

Rubbishing the allegations, BJP’s Ranaghat MP Jagannath Sarkar said, “It was a planned attack. The allegation of selling cycles is baseless. Rather it was actually aimed to kill our leader Bimal Biswas who was instrumental for BJP’s success in the area”.

However, both Bimal Biswas and Subrata Biswas refuted the allegations of opening fire.

A senior police official of Ranaghat police district said, “The situation is under control. We have begun a probe and expect to arrest the culprits soon”.