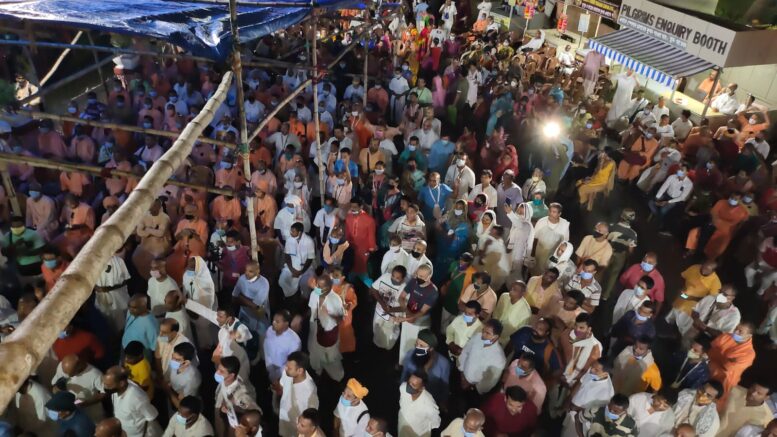 Mayapur, Oct. 18: Monks and devotees of Iskcon organised a congregation  at its headquarters in Nadia’s Mayapur on Monday evening to condemn to alleged atrocities on its devotees unleashed by fundamentalist miscreants in several places in Bangladesh and also demanded “tangible action” against them at the earliest ensuring security of the minority communities there.

They organised a prayer for the departed souls of the two devotees who were killed and later appealed to the Bangladesh government to take strong action against the perpetrators so that the interest of minority community is safeguarded in Bangladesh and long term peace prevails in the society.

Vrajavilas Dasa, Co Director of ISKCON Mayapur said, “Devotees across the globe are deeply shocked and saddened by the recent series of violent events directed against Hindu community in Bangladesh, which include the Iskcon temples and devotees”.

“From October 13  to 15, temples, shops, homes were attacked. Temple and private properties were vandalised, burnt and destroyed and we lost two of our dear devotees”, he said expressing gratitude to the Bangladesh Prime Minister Sheikh Hasina for her sincere approach and statement condemning the attacks.

Subroto Dasa, Media spokesperson of ISKCON Mayapur said, “We have lakhs of devotees from all over the world from different ethnic, cultural, nationalities who the spread the message of peace and harmony. So such attack is quite unfortunate..”

“At Mayapur we have been organising Interfaith festivals on a regular basis and people from all communities taking part in it”, he added.