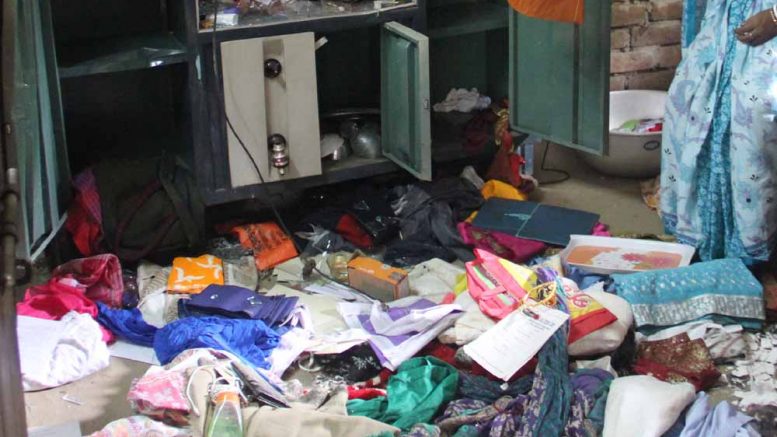 Ransacked house of a BJP candidate in Ghoralia

Krishnanagar, April 29: A close relative of a BJP nominated gram panchayat candidate in Nadia’s Santipur was allegedly raped by Trinamul Congress activists during the early hours of Sunday morning. Armed Trinamul activists had also allegedly ransacked the residences of two BJP candidates and beaten up their relatives in Ghoralia village as the two women did not withdraw their nomination as directed by them.

The two lady BJP candidates were not present at their residences during the incident apprehending attacks due to repeated threats. There absence at home made the Trinamul activists led by Trinamul Congress Chatra Parishad’s former Santipur town committee president Manoj Sarkar and his brother Moni Sarkar turned more violent as they did not even spare the elderly women, children and the expecting mother.

Santipur police have started two separate cases based on the complaints lodged by a BJP candidate and another by mother in law of the other BJP candidate.

Police have so far arrested one of the accused named in the complaint. The five accused persons have been charged for rape, trespassing into house, criminal intimidation, and theft. Medical examination, however, did not confirm rape, a source at Santipur state general hospital where the woman undergone medical examination said.

Nadia superintendent of police Santosh Pandey said, “The investigation so far does not suggest any rape. We need to investigate to find out what actually happened”.

In her complaint the elderly woman said, “At about 2.10am on Saturday night a group of about 15 youths arrived at hour residence brandishing revolvers and iron rods. The kicked open our door and entered inside with abusive language and went on rampage. They had beaten up me and other members of the family. As my daughter in law, an expecting mother for six months tried to resist attack on me, she was kicked off and raped. They also looted valuable from our homes, including cash and jewelries and left”.

“These miscreants have been threatening us since my younger daughter in law submitted nomination as BJP candidate from the area”, she also stated in the complaint.

BJP’s Nadia (South) president Jagannath Sarkar said, “The miscreants of Trinamul not even sparing the women and the expecting mother. The situation is horrible.”.

Trinamul’s Nadia district secretary Gourishankar  Dutta, has, however, refuted the allegation. “The BJP is a feeble force in the district. There is no need for to be afraid of its strength in the district to fight a poll. The BJP making a drama to get political mileage exploiting an incident of conjugal violence”, Dutta said.