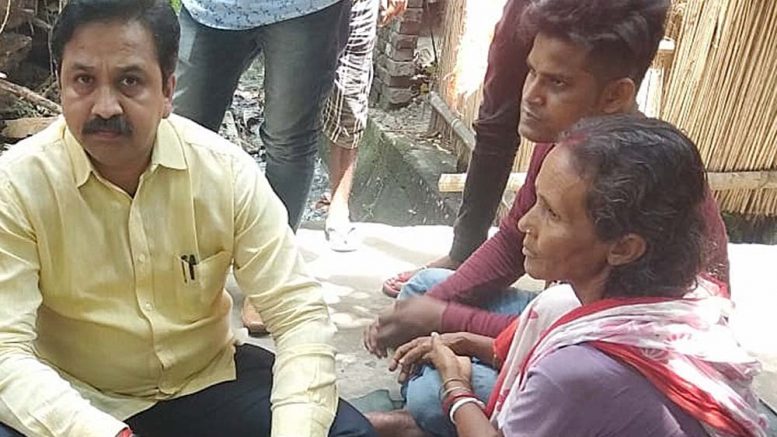 Kalyani, July 22: The Akhil Bharatiya Vidyarthi Parishad’s (ABVP) National leadership on Monday alleged that Trinamul has turned the College campuses in Bengal into battlegrounds and do not mind even to hurl bombs at students.

This was stated by the organization’s former National Secretary and present in-charge of all India University affairs Shreehari Borikar in Kalyani. Borikar stated that the ABVP would raise last week’s Kalyani College bombing incident at the National level to apprise people about the horrible law and order situation in college campuses in Bengal.

Borikar visited the house of Tarak Haoladar and Rahul Biswas, who were injured in the bomb attack at Kalyani College. He met their parents and assured them for all types of support for their treatment.

Borikar said, “The bombing at Kalyani College again proved that the campuses are not safe under Trinamul rule…Trinamul turned the campuses into battlefields…It is only because students are raising voices against them. The party must answer to the concerns of the parents as their wards are being targeted with bombs by their party supporters. We will raise the situation of Bengal College campuses across the country and apprise people about the lawlessness”.

On July 19 four students suffered bomb injuries during a clash between  ABVP and Trinamul Chatra Parishad supporters. Tarak Haoladar, a first-year student was critically injured as a bomb hit his left thigh damaging the limb severely. Haoladar at present admitted at a private hospital in Calcutta. His condition still remains critical, doctors said.

Accusing Trinamul led miscreants against the attack on the students, Borikar said, “I am shocked to see the types of bombs used to attack students. The nature of injuries of the students proved that bombs hurled at the campus were not ordinary ones. I strongly suspect that if these bombs have any link or similarity with those which were exploded in Burdwan a few years ago. Police should investigate this”.

“It is quite unfortunate that repeated incidents of violence in the campus being occurred in Bengal and students who are raising a protest against Trinamul’s atrocities and threats fell victim. There is no campus in the country where bombs hurled at students and that too in front of police who remain silent watcher having no prior information about such attack. They apparently have no clue about the manufacturers of these bombs, about the persons involved behind its transportation and about the places where bombs are being stored. This needs to be inquired”, Borikar told The NfN.

“It is more shocking that even after four days and specific complaint none of the accused has been arrested so far, while Trinamul activists glorifying the attack on our activists in social media”, Borikar added.