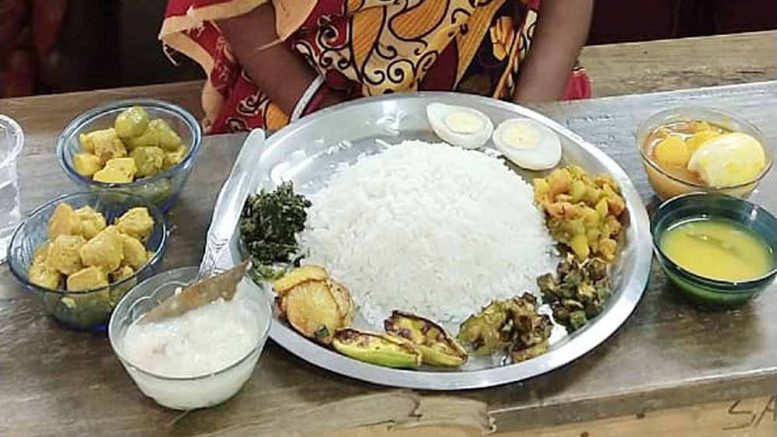 Santipur, July 28: Nearly a dozen expectant mothers were allegedly asked to pose for photographs before a nutritious platter before being asked to leave with a packet of ‘Dim-Bhat’ (Egg-Rice) during an awareness programme on nutrition for mothers and children organised by the West Bengal Government at an ICDS centre in Nadia’s Santipur on Friday.

Bizarrely enough, the incident occurred on the very day when the state women and child development minister Shashi Panja was launching the ‘Supusti Divas’, a new weekly programme to offer nutritional platter to the expecting mothers and children to reduce malnutrition. Moumita posing with the platter

The incident came to light when the husband of an expecting mother, who felt humiliated for such gesture, had lodged a complaint with the Santipur block administration seeking justice for what he termed as ‘inhuman’ act by the local ICDS workers.

Moumita Sandhukhan (25), a resident of Choudhury Para, who was invited to experience the initiative eventually broke down when she was asked by the ICDS workers not to touch and eat the platter, as it was prepared only for sake of photography.

Sources said that at least twenty women including three expecting mothers and at least six children aged about six months were also invited to the programme and had a similar experience as they had to return with a packet of ‘Dim-Bhat’.

The incident has caused major embarrassment to the ICDS authorities in Nadia, which ordered a probe following Moumita’s husband Biswajit Sandhukhan, a sari weaver, lodged a complaint.

Biswajit in his complaint termed the act of the ICDS officials present at the centre as “inhuman” and “humiliating”.

Meanwhile, on Sunday evening a group of ICDS workers led by local supervisor Basana Halder rushed to Moumita’s residence and apologized for the mistake the workers committed. “It was a misunderstanding…the platter was for demonstration. It could not be offered since it was affected by flies”, Supervisor Basana Halder said.

ICDS is a central government programme implemented through state government which provides, food, preschooling, primary healthcare, immunization, health check-up and referral services to children under 6 years of age as well as to their mother and to the expecting mothers with a major objective to reduce malnutrition and to create awareness.

On Friday minister Shashi Panja launched two to new weekly initiatives titled “Supusti Divas” for the expecting and new mothers as well as “Annprashan” for the newborn aged between 6 and 9 months.

The minister said that Supusti Diwas will be organised on the fourth Friday of every month at the ICDS centres where new and expecting mothers will be invited and offered complimentary nutritious platter to make them aware about nutrition.

The initiative was simultaneously launched in all the ICDS centres across the state on Friday.

Moumita said, “They ICDS centre officials invited me very humbly. They offered me a seat, wished good health of the baby I am carrying and finally offered me a platter with different delicacies. They took pictures of me with the platter and then told me not to touch it…but as I looked at them with surprise a woman categorically told me that platter is only for demonstration and not to eat. Soon after they took back the platter and told me to go home taking a pack of that contains rice and egg curry…I was never felt greedy for the platter, but felt seriously humiliated and returned home refusing the dim-bhat“.

“They used the same platter again for other mothers and took back it after taking pictures”, she added.

The NfN identified one of the ICDS workers as Panna Dey, who served the platter and took it back after clicking pictures. She said, “The platter was affected with flies. So we used it for demonstration. We knew that Moumita has a very week health condition due to two early miscarriages. So we were afraid to give her the platter affected with flies. So we decided not to give her so strong food fearing her possible problems”.

But, she refused to reply why only one platter was made when providing a nutritious platter is a planned programme.

Supervisor of the ICDS centre Basana Halder, however, acknowledged that it was “big mistake”. “I was not there during the programme…else I would advise them all to be careful to protect food from files during instead of being concerned of taking pictures”, she said.

Moumita and her husband Biswas, were, however, not convinced with the interpretation of the ICDS team members. “They ICDS team led by supervisor Basana Halder begged apology for not offering the platter. They claimed that the platter was affected by flies..which appeared to be ridiculous and cannot be accepted”, Moumita said.

Her husband Biswajit said, “The supervisor and the ICDS workers are trying to mislead us with own interpretations”.

Bhaskar Ghosh, Nadia district project officer of ICDS termed the incident as an unfortunate one. “This is an act of over-enthusiastic ICDS workers. The new initiative never recommended preparing a platter with multi delicacies, rather arrange it from within the nutritious items that we served regularly. This programme is not a one day wonder, rather a sustainable one. Moreover, it was never told to organise for the sake of photography. The incident will be thoroughly probed”.

“I will meet Moumita Sandhukhan on Monday and learn what actually had happened with her. I would also talk to the supervisor and ICDS workers before deciding the course of action further”, Ghosh said.

State women and child development minister Shashi Panja found the incident as quite ’embarrassing’. She said, “There is no need to make any exaggeration to prepare such platter as it is not a one-day affair. I am not aware of what actually happened in Santipur…but I will enquire why only one platter was prepared for the sake of picture only”.