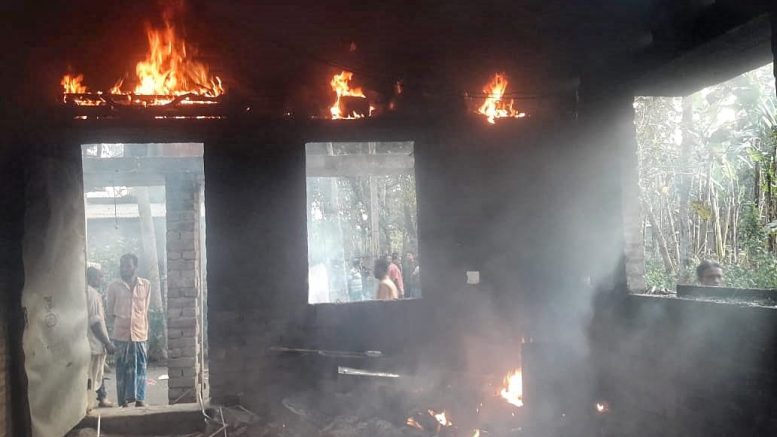 Chakdah, Feb. 28: A Trinamul youth wing leader hacked to death inside an orchard barely two hundred meters away from his home by one of his neighbors in Nadia’s Chakdah on Thursday afternoon.

Police said, Sudhin Som (45), party’s youth wing president of Ward-12, was summoned from home by suspected assailant Subhankar Majmader, one of his neighbors who allegedly hacked him with a hasua following a heated verbal exchange. The deceased leader had earlier returned from Tarapith after a personal visit and scheduled to attend a number of meetings in the local party office.

The incident flared up political tension in the area as angry Trinamul supporters ransacked house of the suspected killer and set it on fire. They also ransacked at least three houses of local BJP activists and beaten them up  since the Trinamul leadership accused BJP of masterminding the murder.

This is the consecutive second murder of prominent Trinamul leader in Nadia since murder of Krishnaganj’s Trinamul MLA Satyajit Biswas who was shot dead near his home in Hanskhali’s Phulbari on February 9 during a cultural programme on the occasion of Saraswati puja.

However, police till late in the evening could not ascertain the motive behind the murder. Local residents meanwhile on anonymity claimed that the murder is fallout of a contention that brewed between deceased Sudhin and prime suspect Subhankar over an alleged extramarital relationship that the deceased had developed recently with a woman for which the accused had warned him.

Local Trinamul Congress MLA Ratna Ghosh, who visited house of the deceased, and accused the BJP of conspiring the murder. She said, “Sudhin was killed because he protested against putting BJP flag near his home”.

Local sources said that they seen Sudhin having a heated exchange with Subhankar near his home. But, he was found later in a pool of blood with multiple injuries and a silted throat. Local residents took him to Chakdah state general hospital, where doctors declared him dead.

Police have started a suo moto murder case. However, it could not so far been able to arrest anyone in this connection. Prime suspect Subhankar Majumder’ managed to flee after the incident.

Deceased leader’s son Soumik Sen, a first year BA student said, “My father earned the wrath because he protested against putting BJP flag in front of our house. There was no other reason behind the murder”.

An officer of Chakdah police station said, “The exact motive behind the murder could not so far been ascertained. We are examining all possible aspects behind the murder including the suspected role of Subhankar Majumder”.

Police gave began questioning wife and teen age daughter of the prime accused after rescuing them from the clutches of a violet mob that torched their house.