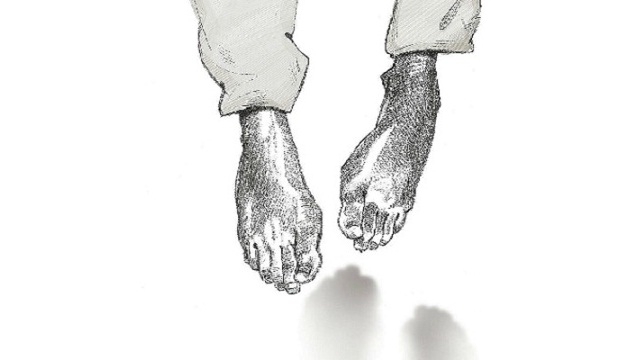 Ranaghat, May 22. A 45-year-old grocer striving hard to bear the expenses of his teen aged daughter’s cancer treatment ended his life by hanging himself with a rope inside his shop adjacent to his residence at Uttar Nasrpara in Ranaghat on Sunday night.

Even though no  suicide note was found with the body, police suspect that deceased grocer Rajesh Roy (41) had acted out of desperation as he was finding it difficult to arrange funds for his daughter Rajashree’s treatment, who has been suffering from throat cancer.

Family sources said, Rajashree (17), who appeared in this year’s higher secondary examination from , was diagnosed throat cancer in last year.

Police said, the grocer was found hanging at about 11.30pm last night inside his shop.

A police officer said: “We have talked to the family members and neighbors of the deceased and came to know that he was depressed for suffering of his daughter as well as for expensive treatment. There was apparently no indication of any foul play behind the death. We have sent the body for autopsy to get a clear reason for death”.

Police have started a case of unnatural death.

His wife Manju said: “Ever since our daughter was diagnosed cancer, my husband became very depressed. Nevertheless, we vowed to fight the disease to save our daughter. But, he gradually lost hope and became depressed due to increasing cost of  treatment.”

For over last one year the girls was under treatment at the Newtown based Tata Cancer hospital.

Manju said: “The recurring expenses for treatment was too costly to bear by us with only source of income being the grocery shop which also often had to keep close due to treatment of our daughter. My husband often expressed his helplessness and feel pained for the entire situation. Yesterday he was speaking about an expensive blood test for our daughter for which we needed Rupees six thousands. But, he could not arrange the money and was in a somber mood. He was in the shop till late hours and ended his life therein”.