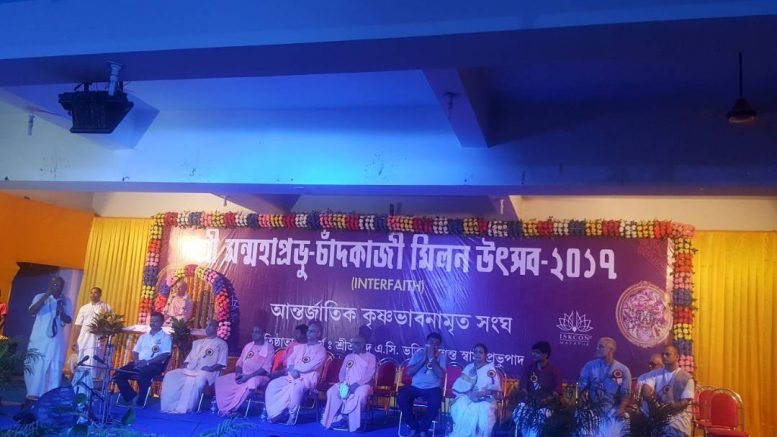 An Imam speaking at the occasion The religious heads of different community at the festival

Nabadweep, May 21: In an endeavour to promote the brotherhood and harmony among different communities carrying out the legacy of relationship between Sri Chaitanya Mahaprabhu and magistrate Chand Kazi that blossomed more than 500 years ago, the International Society for Krishna Consciousness (ISKCON) authorities have organized “Sri Maha Prabhu Chand Kazi Inter Faith Milan Utsav” in Mayapur on Sunday.

Way back in the 16th century Sri Chaitanya Maha Prabhu sowed the seeds of an eternal relationship with magistrate of Nabadweep town Chand Kazi by means of his divine Sankeertan (Congregational chanting) movement.

But, it began with a bitter note.

When aged 17, Mahaprabhu began his Sankeertan movement against caste based prejudices and discriminations. He preached people in the Nabadweep town to chant Hare-Krishna regularly. The Harinam Sankeertan became so popular that no other could hear any other sound except ‘Hare Krishna’ with the melodious beating of Mridangam, Srikhol and Cymbals (Kartaal). However, this made the local Muslims angry, who lodged complaint to Chand Kazi, the local magistrate, a representative of Bengal King Hussein Shah. The magistrate, whose original name was Maulana Sirajuddin, became angry too and put a ban on Harinam Sankeertan. Mahaprabhu launched a ‘Nagar Sankeertan’, a way of peaceful disobedience movement against the diktat and entered the magistrate’s home. The magistrate realized the mistake, lifted the ban eventually and became a friend to Mahaprabhu.

After this incident Chand Kazi approved Maha Prabhu to perform Harinam  Sankeertan without any government interruptions and it still continues to flourish all over the place without any hard feelings between communities.

“The ancient philosophy of India which is based on Veda and Vedanta teaches brotherhood among living beings.  It is this philosophy which Sri Chaitanya Maha Prabhu  promulgated through love for for human beings, as God lives inside everyone” – Siraj Ul Islam

To carry this legacy of harmony, ISKCON organized the festival in Mayapur, organization’s spiritual head quarter on May 21 at Geeta Bhawan.

Explaining the objective and importance of the festival, HG Jagadhartia Das of Iskcon said: “The friendship that blossomed between Maha Prabhu and Chand Kazi, who was also known to be a spiritual person, was actually a unification of religious faith of two religious communities. Our objective is to discuss the commonalities between the religions- Islam and Vaishnavism and develop a harmony”.

“Such festival of harmony bears special significance today as it would help to develop a bond as Indian beyond our respective religious identity. Maha Prabhu had said “Bharat Bhumite Janama hoilo jar, Jivan sarthak kori koro poroupkar”, which means one who has taken his birth as a human being in the land of India should make his life successful and work for the benefit of all other people. The aim of this programme is to convey a message to the world that as Indian, we have to rise above the divisions of caste, creed, political prejudices and make an endeavor together with a feeling of universal brotherhood to make the world a peaceful place” added Das, who is public  relations coordinator of ISKCON Mayapur.

Das said: “Only mutual relation of trust and love can help to uproot negative feelings of hatred, envy, and animosity from the heart of people and make a real human being beyond religious faith and identity”.

Echoing the importance of the festival Siraj Ul Islam, a teacher and resident of Nabadwip, said: “The ancient philosophy of India which is based on Veda and Vedanta teaches brotherhood among living beings.  It is this philosophy which Sri Chaitanya Maha Prabhu  promulgated through love for human beings as God lives inside us”. “The practice of Sankeertan as taught by Maha Prabhu is the mean by which fellow feeling, care, trust and love can be established which can bring peace and harmony in society”, Siraj Ul Islam added.

Speaking on the occasion Hafiz ul Islam, a Islamic preacher said quoting from holy books: “Allah and Bhagwan are just different names of one supreme power”